Blogger Bill Roggio at Threats Watch was more than mildly upset with the Washington Post for the flaws in its Monday article on Information Operations:

But, apparently the disinformation on Middle East reporting by the Washington Post is not an isolated episode with Iraq only. 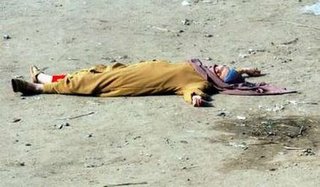 Blogger “Freedom for Egyptians” has a problem with Egyptian riot police knocking women unconscious with teargas and rubber bullets who were waiting to vote and has a problem with the Washington Post having one of the regime’s supporters on it’s payroll.

Freedom for Egyptians writes about another article printed at the “renowned and reputable Washington Post” by one of the Egyptian regime’s stooges and informers on Saturday, December 24th.

In “Ending the Silent War in Egypt”, by Hala Mustafa, Freedom for Egyptians comes away disturbed and confused. FFE has problems with the author, Hala Mustafa, a self described democracy activist:

The Writer (Hala Mustafa) who claims to be a democracy supporter is a member of the regime’s National Democratic Party NDP that rigged the presidential and the parliamentary elections. The thugs of the NDP rapped women, attacked opposition groups in demonstrations and recently helped the ministry of the interior kill 12 Egyptian citizens in the last parliamentary elections. Where is her democracy writings? She likes to play the anti-freedom messenger on the US papers.

All I want to say that I felt disgusted after reading the article and I felt deeply disturbed that the Washington Post is promoting such figures on its website. I wonder whether the Post understands that it was manipulated or not?

It revolts me to see that the Washington Post promoting and giving space to the supporters of tyranny and dictatorship that the Bush Administration is trying to curb their evil. The paper is not helping to build confidence with the Egyptians or Middle Eastern readers but rather causing confusion. I beg the American press to stop hosting tyrannical regimes’ figures and aides!

From printing disinformation to printing a regime’s talking points… not a good week so far for the WaPo!

Glenn Reynolds has a roundup of reaction to the WaPo’s Mideast reporting.