Dutch arms merchant who sold Saddam chemicals is convicted of war crimes as a Hague Court claims Saddam waged genocide against the Kurds. 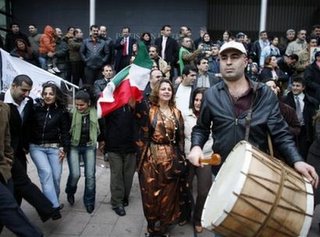 Iraqi Kurds celebrate after hearing the verdict outside the Court in The Hague, the Netherlands Friday Dec. 23, 2005. A court convicted Frans van Anraat, a Dutch chemicals merchant, of war crimes, sentencing him to 15 years in prison for selling Saddam Hussein’s regime the materials used in lethal gas attacks on Kurdish villages in the 1980’s, including the attack at the town of Halabja in 1988, killing more than 5,000 people. (AP Photo/Rob Keeris)

A Dutch court convicted a chemicals merchant who sold materials to Saddam Hussein of war crimes on Saturday:

Earlier, the court said that although it felt it was proven that the former Iraqi ruler committed genocide against Kurds in the 1980s, Van Anraat was acquitted of charges of complicity in genocide.

The court said it could not be proven that he knew of the Iraqi regime’s genocidal intentions.

“The attacks caused the deaths of many people and caused much suffering among the survivors,” the court said in its ruling.

“The crimes are of such a grave nature that even the maximum sentence cannot do them justice,” the judges said before sentencing the Dutchman to the maximum of 15 years in prison.

For war crimes the burden of proof is less, which explains why Van Anraat was convicted on war crimes charges based on the same evidence.

It is the first court case to deal with the attacks against the Kurds. 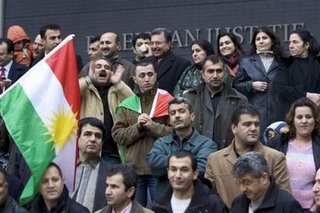 Iraqi Kurds gather outside the Court in The Hague, the Netherlands on Friday Dec. 23, 2005. The court convicted Frans van Anraat, a Dutch chemicals merchant, of war crimes, sentencing him to 15-years in prison for selling Saddam Hussein’s regime the materials used in lethal gas attacks on Kurdish villages in the 1980’s, including the attack at the town of Halabja in 1988, killing more than 5,000 people. Kurdish flag at left. (AP Photo/Rob Keeris)

Dozens of Kurds were present for the court’s decision:

“These attacks were committed with the intent to destroy the Kurdish population of Iraq,” the ruling said.

“The court finds the intent of destruction was targeted against part of the Kurdish group as part of a genocidal intent.”

Frans van Anraat, 63, was not in court for the verdict but dozens of ethnic Kurds were.