Here is the headline from this morning’s AP story on wiretaps, republished at ABC, MSNBC, and at least 76 other places:

But, here’s the proof that they did…
That document they were all smiling about called the Patriot Act.
(Picture via Drudge) 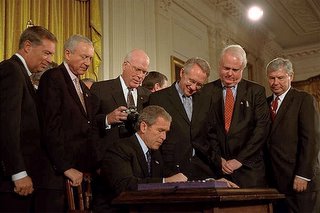 Now, apparently some democratic Senators are saying they never signed on to wiretaps. Without questioning this, the liberal media has this splashed all over the news this morning:

Some Democrats say they never approved a domestic wiretapping program, undermining suggestions by President Bush and his senior advisers that the plan was fully vetted in a series of congressional briefings.

“I feel unable to fully evaluate, much less endorse, these activities,” West Virginia Sen. Jay Rockefeller, the Senate Intelligence Committee’s top Democrat, said in a handwritten letter to Vice President Dick Cheney in July 2003. “As you know, I am neither a technician nor an attorney.”

Rockefeller is among a small group of congressional leaders who have received briefings on the administration’s four-year-old program to eavesdrop without warrants on international calls and e-mails of Americans and others inside the United States with suspected ties to al-Qaida.

Former Sen. Bob Graham, D-Fla., who was part of the Intelligence Committee’s leadership after the 9/11 attacks, recalled a briefing about changes in international electronic surveillance, but does not remember being told of a program snooping on individuals in the United States.

Sen. Harry Reid, D-Nev., said he received a single briefing earlier this year and that important details were withheld.

Of course, this is totally ridiculous. If you look at the Patriot Act that was enforced back in October of 2001, you see this:

SEC. 204. CLARIFICATION OF INTELLIGENCE EXCEPTIONS FROM LIMITATIONS ON INTERCEPTION AND DISCLOSURE OF WIRE, ORAL, AND ELECTRONIC COMMUNICATIONS.
Section 2511(2)(f) of title 18, United States Code, is amended–
(1) by striking `this chapter or chapter 121′ and inserting `this chapter or chapter 121 or 206 of this title’; and
(2) by striking `wire and oral’ and inserting `wire, oral, and electronic’.

SEC. 206. ROVING SURVEILLANCE AUTHORITY UNDER THE FOREIGN INTELLIGENCE SURVEILLANCE ACT OF 1978.
Section 105(c)(2)(B) of the Foreign Intelligence Surveillance Act of 1978 (50 U.S.C. 1805(c)(2)(B)) is amended by inserting `, or in circumstances where the Court finds that the actions of the target of the application may have the effect of thwarting the identification of a specified person, such other persons,’ after `specified person’.

1–102. Pursuant to Section 102(b) of the Foreign Intelligence Act of 1978 (50 U.S.C. 1802 (b)), the Attorney General is authorized to approve applications to the court having jurisdiction under Section 103 of that Act [50 U.S.C. 1803] to obtain orders for electronic surveillance for the purpose of obtaining foreign intelligence information.

1–103. Pursuant to Section 104(a)(7) of the Foreign Intelligence Surveillance Act of 1978 (50 U.S.C. 1804 (a)(7)), the following officials, each of whom is employed in the area of national security or defense, is designated to make the certifications required by Section 104(a)(7) of the Act in support of applications to conduct electronic surveillance: (a) Secretary of State. (b) Secretary of Defense. (c) Director of Central Intelligence. (d) Director of the Federal Bureau of Investigation.

If you go back and look at the roll call of the vote on the Patiot Act back on October 25, 2001 you see it passed by a margin of 98-1 with Sen. Feingold from Wisconsin as the only dissenting vote.

Sweetness and Light has the documents posted from 2001 that made it known then that wiretapping was going to be part of the new game to prevent terrorist attacks. This is not “new” news!

Michelle Malkin reports today that the media is in hysterics and even digging up old news to make this wiretap/spying story stick.

John Hinderaker at Powerline makes an obvious point this morning concerning the legality of wiretaps.

And, as Glenn Reynolds notes today, President Clinton had his own challenges with “spying” even with no war:

The Clinton administration has repeatedly attempted to play down the significance of the warrant clause. In fact, President Clinton has asserted the power to conduct warrantless searches, warrantless drug testing of
public school students, and warrantless wiretapping.