Take the total number of Chinese killed by the Chinese Communist Party (Approximately 75 million), and divide it by the number of days that the CCP has been in power (20470), and you can see that, on December 6, 2005, the Chinese government would have had to kill another 3,643 just to maintain their daily average.

The simmering tension in China boiled over in Dongzhou Village. 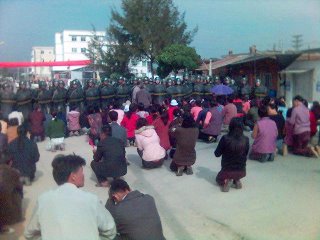 On December 9, villagers were surrounded by armed police and unable to leave the village. Large number of the victims’ relatives held incense and kneeled down to beg police to allow them to claim the bodies. (The Epoch Times)

The Epoch Times continues to lead the media on the story of the Dongzhou Village Massacre:

A villager, contacted on December 8, described the situation: “Yesterday, we were busy dealing with the problems caused by the incident. We counted the number of dead and injured and sent six corpses to Dongzhou Hospital. A severely injured villager died and there are still 30 to 40 people unaccounted for. No one knows whether they are dead or hiding. We heard that there are still corpses in the mountains yet we are forbidden to enter the area. The town’s main representatives are in danger. As of now, the authorities do not simply arrest and then sentence people, but shoot them at will. A villager was shot dead in public yesterday afternoon.”

One villager reported that 33 residents had been shot dead and more than 20 were still missing, most of whom were in their twenties. One of the missing was a young man who worked in another province, but had returned to Dongzhou Town to get married. When he went to the power plant to see what had happened on December 6, he was shot dead at the scene.

A villager said that the authorities attempted to destroy the corpses. After the massacre on the night of December 6, the authorities cremated some of the bodies and sent others to the seashore for disposal. Some residents wanted to take back the corpses but were prevented from doing so. The armed police and riot teams cleared the scene in front of the power plant where they had fired on the villagers…

…A 70-year-old farmer said that he had never seen such a terrible thing in his lifetime. “When the Chinese Communist Party kills people, it is even scarier than when the Japanese army attacked the town or than bandits and gangsters.” He continued, saying, “The villagers of Dongzhou are honest people who can endure hardship. How could the CCP fire on such decent citizens?!”

China’s official state media has fianlly admitted to the tragedy but has minimized the carnage. 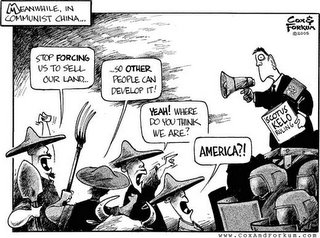 As shown at Cox and Forkum, in China they protest KELO.

China reported 74,000 mass incidents of unrest in 2004, according to a police tally. China has changed their Dongzhou Village story at least three times from denying the incident, to blaming “unruly protesters”, to their current stand of blaming a local official.

Timor-I Ling continues to the story with his “Trouble in Paradise” series of updates.