Let’s see… It has been 11 months since George Bush made his historic Inaugural Address to seek and support democratic movements in foreign lands. But, sadly the BBC points out today that after 11 months, this policy is falling short!

To end the year on target, Humphrey Hawksley and the BBC has a crazy piece of Anti-Bush propaganda posted blaming centuries old poverty in Morocco as proof that democracy is failing in the Arab World. 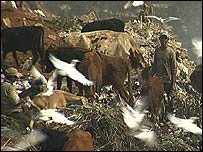 Throughout the year, the US has hailed a series of elections in the Arab world – the latest in Iraq – as evidence that its foreign policy is getting results. But what can democracy really offer ordinary people? Humphrey Hawksley travelled to Morocco to find out.

Behind us was an open drain then shanty huts which crept back along the grey rocky landscape. There was a mild aroma of rotting rubbish.

Across the road, two men from the interior ministry, sitting on wooden chairs, eyed us, but said nothing…

…I had come to Morocco, not just to look again at more developing world poverty, but to test America’s policy of pushing for democracy in societies which for years have been ruled through dictatorship.

Can it really be done without first building mature political parties, an uncorrupted civil service, a fair court system, institutions which take not months, but generations to create?

For the next few days I talked to dozens of people in Morocco about democracy. It had little or no resonance. “Elections”, scoffed one young mother. “During the voting the politicians come, the street light works and water flows from the taps. As soon as voting stops, nothing works again.”

“You don’t need elections to have a responsive government,” said a farmer. “They’re just an excuse.”

The poverty in Morocco is, of course, the fault of George Bush and his selfish policy of promoting democracy in the Arab World. This is especially true since the Arab people are not yet ready to make their own decisions. They need Hawksley and the BBC to make decisions for them is all. What rubbish!