“As long as I am alive, I will not be resigned to being a slave.”

Feng Bingxian
During his trial for organizing protests in China.
December 26, 2005

“They accused my father and the other three defendants of ‘disrupting social order’, which is groundless, since we only gathered around 200 people to stand in front of the provincial government and ask them to negotiate. It was very ordered and did not cause any damage,” said Feng Yanwei, Feng Bingxian’s son. 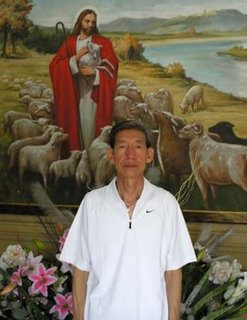 An undated file picture shows Feng Bingxian while on the run from Chinese police. Feng was caught in July after evading arrest for two months. He pleaded not guilty on December 26, 2005 to a charge of disturbing social order when he went on trial in Jingbian in the northwestern province of Shaanxi. The 59-year-old is accused of organising protests after the government seized private oil wells worth billions of yuan. (REUTERS/Stringer)

The trial in China of jailed investor Feng Bingxian started today. Feng is being tried for organizing protests after the Central China Government confiscated his oil wells:

A Chinese investor, accused of organizing protests after the government confiscated lucrative private oil wells, pleaded not guilty on Monday to a charge of disturbing public order in a landmark trial marked by tight police security.

About 100 fellow investors were barred from attending the opening of Feng Bingxian’s trial and gathered in a show of support outside the courthouse in Jingbian in the northwestern province of Shaanxi.

Scores of police patrolled the area, which was closed off to traffic.

“I tried to peacefully reason (with the authorities) after I was deprived of my property. Now I have been further deprived of freedom. But as long as I am alive, I will not be resigned to being a slave,” Feng said in his defense, a copy of which was obtained by Reuters.

“I hope the judges could be loyal to laws rather than to their superiors, be immune from or less susceptible to government interference and arbitrate impartially and out of conscience, justice and professional ethics,” the 59-year-old Feng added.

A former official who went into private business and invested in 13 oil wells in northern Shaanxi, Feng is accused of organizing illegal protests by several hundred disgruntled investors in April and May.

After the investors struck oil from a project they sunk millions into, the Chinese government came in and seized the wells and paid a paltry sum to the investors:

About 6,000 small investors, many local farmers and former officials, bought the wells with the blessings of the government in the late 1990s, pouring in about 7 billion yuan ($867 million) as demand for energy soared.

Feng invested about 10 million yuan (about $1.2 million) in the wells, according to his son.

In an about-face after the private investors struck oil, the provincial government seized the wells in 2003 and paid what investors said was paltry compensation.

(They were offered only 20% of the total value in compensation.)

The investors’ complaints were widely reported in the Chinese press before authorities restricted coverage, and the case became the focus of a nationwide campaign for stronger protection of private investors’ rights.

In Dongzhou Village near hong Kong earlier this month, government police opened fire on protestrs killing at least 30 people. The villagers were protesting the government for inadequate compensation after their land was taken for development.

Dog Pundit has news today on Xu Wanping who was recently convicted for organizing a ‘signature campaign’ in China.