IRAQI OPPOSITION PROTESTERS TOOK TO THE STREETS OF BAGHDAD TODAY BUT THEIR NUMBERS DWINDLED SINCE THE WEEKEND,
VIDEO HERE

As Mohammed at Iraq the Model was saying yesterday the political situation in Iraq seems have subsided in the last 48 hours. A call from Opposition parties for a massive protest on Tuesday drew from 5-10,000 in a city of 5.7 million. This is not the showing that the opposition had hoped for and clearly is not a sign that the masses are with them. 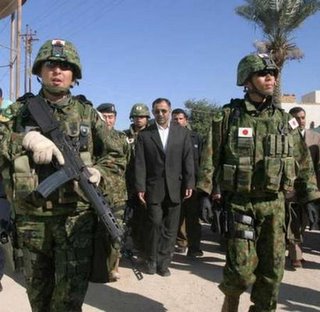 Iraqi officials said that insurgents are trying to divide Iraq as 10,000 people protested Tuesday in Baghdad, a city of 5.7 million:

More than 10,000 people, some carrying photos of Allawi, demonstrated in Baghdad in favor of a government that would give more power to Sunni Arabs and secular Shiites. Marches chanted “No Sunnis, no Shiites, yes for national unity.”

“We’re protesting to reject the elections fraud. We want to ask the government and the elections commission: ‘Where did our votes go? Who stole them?'” said Abdul Hamid Abdul Razza, a 45-year-old barber.

Preliminary results previously released gave the United Iraqi Alliance, the religious Shiite coalition dominating the current government, a big lead but one unlikely to allow it to govern without forming a coalition with other groups.

Bahaa al-Araji, a member of the Shiite alliance, said the group was preparing to negotiate with other political blocs and had already met with the Sunni Arab Iraqi Islamic Party.

Al-Araji also said likely candidates for prime minister were current Prime Minister Ibrahim al-Jaafari, who heads the Islamic Dawa party, and Adel Abdul-Mahdi, who belongs to the other main Shiite party, the Supreme Council of the Islamic Revolution in Iraq.

After visits by Tony Blair, Donald Rumsfeld and Polish Prime Minister Kazimierz Marcinkiewicz over the weekend, Ukrainian Leader, Viktor Yushchenko made a surprise visit to Iraq on Monday, December 26. 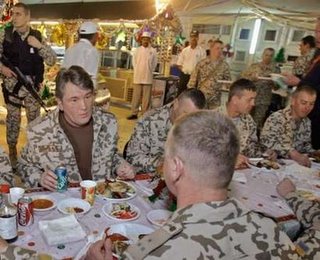 Caspar Weinberger and Wynton Hall wrote in USA TODAY on Tuesday that the bravery of our US Iraqi Troops matches that the Greatest Generation:

First Sgt. Justin D. LeHew feels similarly. LeHew was an amphibious assault platoon sergeant in Iraq and was one of only 10 individuals to receive the Navy Cross, second only to the Congressional Medal of Honor. Moving into Nasiriyah, his column of 12 amphibious assault vehicles came under extreme fire by a massive Iraqi force that had burrowed itself inside buildings. When one U.S. vehicle took a hit by a rocket-propelled grenade, LeHew raced toward the fiery scene.

“The first thing I see on the ramp is the leg of a Marine. … From what I could tell, everybody in the back was dead — at least that’s what I thought at the time. As I was crawling through all that stuff into the center, I stepped on something and actually heard someone gasp for air. … So I started digging around and underneath, bent in a V-position, was a live Marine.”

That Marine’s name is Cpl. Matthew Juska. He is alive today because LeHew refused to give up his search for fellow Americans, even as enemy fire pelted the flaming vehicle.

LeHew says the only thing he asks from war critics is that they support the men and women who safeguard their right to dissent. “You can say that you feel that this war is unjustified or whatever, but you support the home team, the American servicemen in the fight.”

This humble plea — to stand with those who fight for us — is the one echoed by the 2.4 million men and women in our armed forces. And yet, even as the voices of those who oppose their efforts get louder, the voices that carry our heroes’ stories remain but a whisper.

Bring on the good news!

Poland announced today that it would keep troops in Iraq until the end of 2006.

And, another mass grave was also discovered in the Shiite holy city of Karbala today.