“AMID THE RUBBLE THERE IS HOPE”


This video is approximately 8 minutes in length.

“The blood of innocents is a heavy, heavy stain – it will not easily be washed away.”
The Anchoress

USAID partner, Save the Children, is working with community leaders to identify projects, both large and small, that will benefit the local community, including the rehabilitation of the Shatt Al-Arab Kindergarten in Basra, Iraq. The project was funded under a grant from USAID and contributions from the community. (USAID)

This may shock Harry Reid, Cindy Sheehan, and frankly most of America who have not been given an accurate picture of the progress in Iraqi society, but at the current rate of progress, the need for American soldiers in Iraq by the end of 2006 will be greatly diminished and many of the troops will be on their way home leaving a successful Iraq in their wake not a doomed quagmire.

Methodically, the US and its steadfast Allies are winning the War in Iraq. 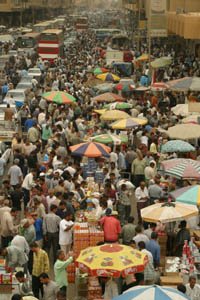 Crowds and cars compete for space in a street market near the Central Bank of Iraq in Downtown Baghdad. (USAID)

Iraq is gradually, methodically putting the foundation in place for a successful future. Here is news from Iraqi patriot Haider Ajina on current positive developments that you will not here in the US defeatist media.

Let us not forget…

Iraqi vice president Adel Abdul Mehdi described the current violence in his country while ruthless is preferable to the days of Saddam’s rule. During Saddam’s rule over 30 thousand Iraqi were killed yearly in addition to the wars his dictatorial rule engaged in.

Abdul Mehdi while visiting Washington DC was interviewed by the Washington Post to whom he complained about the media and its readers concentrating on bad news from Iraq, and disregarding the great accomplishments of and in Iraq.

Ajinas adds: A second high-ranking Iraqi official gives it to the media about ignoring accomplishments and positive news in Iraq. Next thing you know the mainstream media will at least giving good news from Iraq equal ink or air. I can only hope…

An average of over 30 thousand Iraqis a year killed by Saddam’s regime since 1980 that is almost 700 thousand and all the dead from the Iran, Kuwait & final war of Iraqi liberation estimated over 1 million. We have stopped a murderer of 1.7 million Iraqis and hundreds of thousand of Iranians & Kuwaitis. He can kill no more nor can he strike fear in his people or his neighbors or the region. The same with Hitler, Stalin, Mau, Japanese Imperialist expansion, stopping North Korea etc. 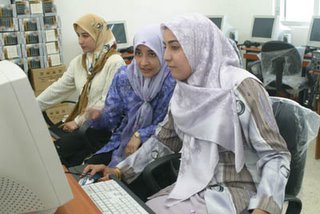 Iraqi women practice their computer skills at the Fatima Al-Zahra Center for Women’s Rights in Hilla, one hour south of Baghdad. (USAID)

“Iraqi defense ministry opens its doors to women who want to enlist.”

Iraqi defense ministry has opened its doors to women volunteering to join the ranks of the Iraqi armed forces. Iraqi minister of defense Dr. Sa’adoon Alduleimi (a Sunni) said that the invitation is open to all women who meet the standards especially graduate in the medical and engineering fields.

Alduleimi added that “Women are welcome in both the military and civilian services of the defense ministry. Alduleimi clarified that women with a high school diploma may apply to the military college allowing them to graduate with the rank of lieutenant in the Iraqi armed forces. Iraqi officials announced that they plan to build its military to a force of 350 thousand.”

Ajinas adds: This is more evidence of the continual progress in Iraq. Iraqis we train are increasingly taking the leadership role in improving security in Iraq (as they should), while respecting and abiding by the rule of law. This is a fundamental change in the attitude of Iraqi security forces from just 31 months ago.

“Ziebary clarified that there is a number of wide military operations planned for the area along the Syrian boarder, which will expand upon the current operation, operation “Iron Curtain”. These expanded operations will include the cities of Hadiethah, Raweh, A’aneh, Heit, Alramadi and then into Dialah Province (west of Baghdad). He added that intelligence received confirms that armed terrorist continue to infiltrate Iraq from Syria. This is a gravely dangerous situation which has forces us to expand our operations along the border with Syria”.

Ajinas adds: Iraqi security forces are taking the initiative in securing their borders. Here again is an example of our training having a tremendous positive impact on the Iraqi security forces ability to secure Iraq. When I last spoke to my father (on Friday) in Nejaf he told me that Ziebary had announced that security operations will be stepped up and doubled until the terrorist are crippled, and that Baghdad is the next large operation after the border region.

The price of a barrel of the Iraqi crude oil, which is exported to global countries, has reached $55/barrel.

Dr. Ibrahim Mohamed Bahr Al Oloum said that the oil prices mainly rely on the operations of transportation, density and the quality of the product. He confirmed that the Iraqi oil exports have reached app
roximately 1.6 million barrels a day. A barrel is sold at about 55 dollars. This means that the Iraqi revenues from exporting oil have reached 88 million dollars a day.

Ajinas adds: While the terrorist in Iraq are being squeezed into a corner on the Syrian border, Iraqi oil exports are increasing to help the country get back on its feet.

Iraqi Government pays 3.7 million Iraqi Dinnars to each family of those who died in custody

This same source (wishing to remain anonymous) said that a special committee has been formed to monitor the daily operation of prisons & detention centers, to ensure the availability and supply of all the day to day needs of those in custody, and monitor the condition of the prisons, detention centers as well as prisoners and detainees. The committee will also monitor the prevention of human rights abuses, and keep lists of those missing and detained. In addition the committee will investigate any reports or complaints of human rights abuses and it will insure the protection of rights of Iraqi citizens.

Ajinas adds: While it is very sad that prisoner abuses happen it is encouraging that the new Iraq steps up to the plate immediately and remedies the situation and compensates the victims or their survivors. I know of no Arabic country that has a policy that even come close to this one.

Only 31 month ago (when Saddam was in power) an Iraqi arrested was an Iraqi disappeared and only if very lucky would his family ever see him or her again dead or alive.

Will the US turn its back on Iraq now that there is light at the end of the tunnel? 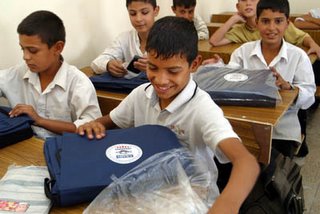 Students from the Zein Al Abdeen secondary boy’s school in the Amil district of Baghdad with their new school bags which contains, pens, pencils, notebooks, a calculator and other school supplies. USAID is funding the purchase and distribution of 1.5 million of the bags through a contract with Creative Associates International. All Iraqi secondary students will receive the bags. (USAID)

During his visit to Vienna Austria to attend a conference about Islam in pluralistic societies the Iraqi president Jellal Al-Talebani, emphasized that matters in Iraq are improving.

During an interview Al-Talebani pointed out that Iraq’s constitution has been accepted and there will be elections in mid December. He said that they have succeeded in curtailing terrorist activities.

Ajinas adds: I was wondering when an Iraqi official (let alone the president) would give it to the media and call them on their bias covering of Iraq.

The Prime Minster of Iraq Dr. Al-Ja’afary gave it to Aljazeerah during a press conference in the U.S.A by accusing them of enticing violence and giving Iraq bias coverage. I wonder if this interview will be carried in any of our press?

Nope!… And of course there is much more “Good News from Iraq”

Kurdistan, “The Other Iraq” started an ad campaign Thanking America this month.

USAID has much more on the Iraqi success story.

Stefania at Free Thoughts weighs in.