SEVENTH NIGHT OF VIOLENCE IN PARIS IS WORST YET!
VIDEO HERE

As the violence continues to escalate in France, the attacks against Interior Minister Nicolas Sarkozy continue to increase as well. Sarkozy is one Frenchman who looked through the multiculturalist smoke from the exploding molotov cocktails to call the rioters “thugs”. Therefore, it only makes sense to blame him for the torchings of schools, cars, malls and the toppling of a local police station. 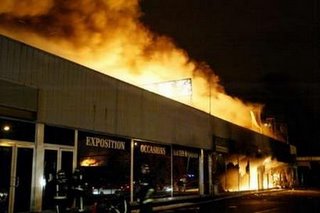 Firemen confront a burning shopping center during clashes between French youth and riot police in Paris suburb of Aulnay sur Bois, early November 3, 2005, in a seventh night of rioting. Street fighting, sparked by the deaths of two teenagers electrocuted while apparently fleeing police during a local disturbance, spread to other parts of the poor suburbs ringing the capital to the north and the east. (Reuters)

The violence in Paris continues to escalate!

At least 15 people were arrested and nine injured on a seventh consecutive night of violence in northern Paris.

Prime Minister Dominique de Villepin’s government has promised to restore order but is battling to paper over differences between ministers over the best way to tackle the unrest. 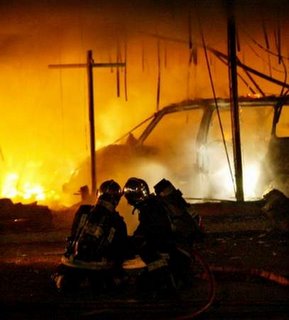 Firemen confront burning vehicles during clashes between French youth and riot police in Paris suburb of Aulnay sur Bois, early November 3, 2005, in a seventh night of rioting. Street fighting, sparked by the deaths of two teenagers electrocuted while apparently fleeing police during a local disturbance, spread to other parts of the poor suburbs ringing the capital to the north and the east. (Reuters)

Mosque leader prays for calm in the troubled suburbs:

The violence, which has spread to at least nine Paris-region towns, has exposed the anger in France’s poor suburbs, some of them ghettos where police hesitate to venture despite evidence of being fertile terrain for Islamic extremists and criminal activity.

Leaders at Clichy-sous-Bois’ mosque prayed for peace and asked parents to keep teenagers off the streets.

But on Wednesday night young people threw rocks at police in six suburbs in the Seine-Saint-Denis region north of Paris that includes Clichy, police said. About a dozen cars burned in the Le Blanc-Mesnil suburb and residents – some in bathrobes and slippers – poured into the streets to watch. 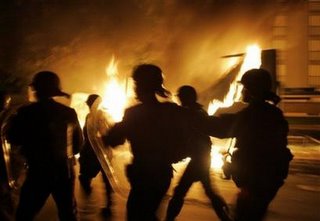 French riot police officers run past a burning truck in Paris suburb, Aulnay-sous-Bois, early Thursday, Nov. 3, 2005. For a seventh straight night, groups of youths set fire to cars and shops in at least nine towns northeast of the capital. (AP)

The disturbances damaged a shopping center, car dealership and primary school as more than 1,000 police were deployed to quell the unrest, which was triggered last week by the deaths of two teenagers.

Aljazeera has a timeline of the Paris events starting with Interior Minister Sarkozy declaring a “war without mercy” on violence in the suburbs back on October 19th.

A growing problem in the West is not only our insane, suicidal embrace of “multiculturalism,” but an inability to recognize that militant Islam is an enemy intent on destroying freedom wherever it exists. Those Muslim rioters in Paris, angry about being unemployed or whatever their excuse, need to be crushed…

Jihad Watch says France needs to better define the problem.
Ace of Spades calls them “Watts Riots, EU Style!”
Captain’s Quarters says that “Muslims Try To Outdo Von Choltitz.”
Meryl Yourish looks back at a Weekly Standard warning in 2002. Brilliant!
Southern Appeal looks at the cryptic news coverage.
Jamul Blog explains the consequences of French Policy.
Brussels Journal has advice on parking your car.
Charles Johnson joins Jacques Chirac and calls for calm.
The Anchoress answers the question, “What would Rudy do?”
Outsid
e the Beltway notes that shots are being fired!