US Military on Call to Rescue France

FRENCH PROTESTERS HELD A SILENT MARCH AFTER 900 VEHICLES WERE TORCHED, PARAMEDICS WERE STONED AND A NURSERY SCHOOL WAS BURNT TO THE GROUND ON THE NINTH NIGHT OF RIOTING,
VIDEO HERE

Night #10 of French Rioting and the violence continues to spread and gain momentum! 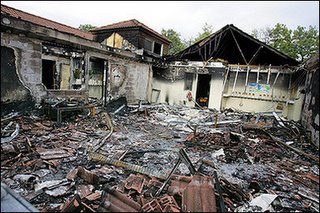 Acheres’ school, destroyed by fire overnight near Paris. French authorities stepped up police action against youths responsible for more than a week of urban riots as suspicions grew that the gangs were becoming increasingly organized. (AFP/Jean-Pierre Muller)

The violence in France is spreading into the city limits of Paris and throughout France:

New fires and disturbances broke out after dusk Saturday evening. By 10 p.m., two schools had burned and more than 100 vehicles had burned including several ignited by a Molotov cocktail near the Gare du Nord train station in Paris, within the city limits of the capital.

Rioters had torched about 900 cars around the nation late Friday and Saturday, the largest number since the disturbances began. They also set ablaze a city hall, schools, a car dealership, a textile warehouse, a daycare center and other buildings in immigrant neighborhoods on the edge of the capital. 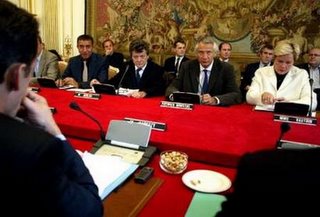 Violence and arson spilled from the suburbs of Paris to at least 15 cities across France Saturday, as police and government officials struggled unsuccessfully for the 10th day to stem the expanding unrest.

Early Sunday, the Interior Ministry said the disturbances had spread to the capital itself where 11 vehicles were burned, the Associated Press reported.

Police said groups of young men torched nearly 900 vehicles and at least a dozen schools, police stations and youth centers around the country. Though the unrest remained concentrated in the poor suburbs ringing Paris, violence erupted in Strasbourg near the German border, Bordeaux in the southwest, Rouen in Normandy and Orleans in the Loire Valley.

Tactics were similar in all areas: mobile bands of youths set random blazes, according to police and local news media accounts. Police responded more aggressively — about 258 suspects were arrested Friday night — but remained largely helpless in preventing the violence, the most serious to hit France since the student riots of 1968.

Prime Minister Dominique de Villepin called eight ministers and a senior Muslim cleric to his offices in an emergency meeting Saturday to discuss the violence, but President Jacques Chirac maintained his silence. Chirac has not publicly addressed the crisis since it began Oct. 27 after two teenagers from the Paris suburbs were electrocuted at a power substation while dodging a police checkpoint.

Much of the reporting we see in the Western Press like this from AFP make it clear that if your feelings are hurt, or you are called names, especially if you are an unemployed minority, then torching cars, hurling molotov cocktails, and lighting up handicapped people in wheelchairs is a “natural consequence”. 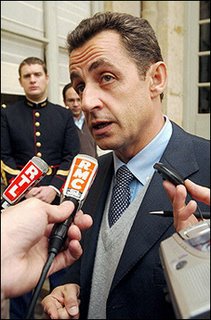 French Interior Minister Nicolas Sarkozy, just before the riots erupted in and around Paris, called delinquents in the suburbs ‘rabble’ and vowed to clean up crime in the neighbourhoods ‘with a power-hose’ — comments that have angered people living in those areas.(AFP/Jean Ayissi)

The French Authorities discovered a gasoline bomb factory in a southern suburb of Paris (via Thomas the Wraith):

Police found a gasoline bomb-making factory in a southern suburb of the city, with more than 100 bottles, gallons of fuel and hoods for hiding rioters’ faces, a senior Justice Ministry official said Sunday.

Six youths, all aged under 18, were arrested in the raid Saturday night on a building in Evry south of Paris where the gasoline bombs were being put together, Jean-Marie Huet, the ministry’s director of criminal affairs and pardons, told The Associated Press.

The discovery, Huet said, shows that gasoline bombs being used by rioters “are not being improvised by kids in their bathrooms.”

The New York Times is sounding French as they blame the riots on a trap of ethnic and religious discrimination!

The corrosive gap between America’s whites and its racial minorities, especially African-Americans, is the product of centuries: slavery, followed by cycles of poverty and racial exclusion that denied generation after generation the best the United States could offer. France, on the other hand, is only beginning to struggle with a much newer variant of the same problem: the fury of Muslims of North African descent who have found themselves caught for three generations in a trap of ethnic and religious discrimination.

That was absolutely one of the wackiest paragraph put to print in a very long time! Makes you feel concerned about liberal leadership taking over local government.