Her father was a tribal sheik.

He was shot in 1994 at his front door by Saddam Hussein’s former intelligence agency in Beirut where the family had fled to from Iraq. It is believed that “Oil for Food” money paid for his assassination.

Safia says she is going to be Iraq’s first female President!

Ms. Suhail, who said she had recently received death threats, now lives in Baghdad with her husband, an official in the Ministry of Human Rights. She has also held the position of Iraqi Ambassador to Egypt since the liberation of Iraq.

Safia told President Bush that her country was occupied by Saddam Hussein for 35 years, and she thanked American troops for paying the cost. 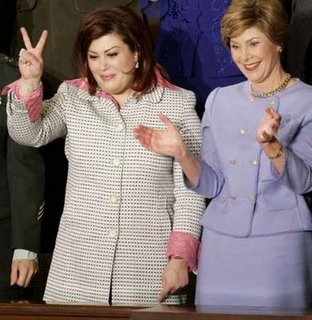 U.S. first lady Laura Bush (R) applauds beside Safia Taleb al-Souhail, leader of the Iraqi Women’s political council, during U.S. President George W. Bush’s State of the Union address in the House Chamber in Washington in this February 2, 2005 file photo. Safia Taleb al-Souhail has ambitions to be Iraq’s first woman president one day. A month before a poll in which she hopes to win a parliamentary seat, the former exile is upbeat about women’s rights and democracy. To match feature Iraq Women. (REUTERS/Jason Reed/Files)

Safia al-Suhail, is walking in her father’s footsteps and is hoping to gain a Parliamentary Seat in this month’s election:

Safia Taleb al-Souhail has ambitions to be Iraq’s first woman president one day. A month before a poll in which she hopes to win a parliamentary seat, the former exile is upbeat about women’s rights and democracy.

She says the only reason a new Iraqi constitution approved in a referendum last month did not do as much for women as she hoped was a lack of time to negotiate the details, and she is sure changes can be made in the new parliament.

“I believe our situation as women is going to be much better in the near future,” says Souhail, a leading anti-Saddam Hussein activist who was invited to U.S. President George W. Bush’s State of the Union speech in February where she made headlines by hugging the mother of a U.S. marine killed in Iraq.

“I’m very serious,” says Souhail, 40, assessing her political chances. “I will run for election for Iraqi president. Of course not this time, but maybe next time.”

Safia is positive about future opportunities for women in Iraq. 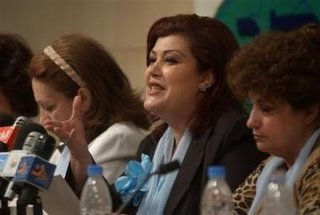 Safiyah al-Shuhail, center, spoke with other prominent women in Iraq during a meeting, Monday, Aug. 1, 2005, in Baghdad, Iraq to discuss the future of women’s rights in Iraq. The women met to push that womens rights would be recognized in the Iraqi Constitution. (AP)

Safia is clear about opportunities to discuss and amend the Constitution that was recently ratified in October.

“We have the chance, especially at the beginning, to re-discuss it, to push for some clarifying articles,” Souhail said. Family law is one area that needs to be standardized so that different religious sects cannot trump Iraqi national law in the area of marriage or inheritance, she said.

“What we’re asking for is not against our tradition or our religion or views in society, but maybe we needed more time to explain it,” Souhail said, playing down the strength of opposition. “I don’t know who’s going to resist it,” she said.

More than 200 parties and coalitions have registered for the ballot, including secular parties and small local groups that have a better chance of winning seats under a new system of proportional representation for Iraq’s 18 provinces. 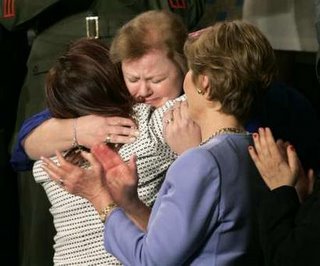 Safia explains that this time issues will be more important to the voters than clinging to one’s bloc:

Every third name on each list must be a woman, a provision Edwar said put some religious parties in a difficult situation.

“Some of them are still saying ‘Why should we put a woman on the list?”‘ she said.

Iraq should not turn its back on its long history of education among women dating back long before Saddam’s days.

“We need the parties to include strong women. We don’t need a puppet or a tool in your hands, to be used only for your own interest,” she said. “But they don’t like to have strong women.”

Souhail, the first woman on a list headed by secular Shi’ite former Prime Minister Iyad Allawi, said the next parliament should be less dominated by big blocs, with more secular voices.

“People at the beginning were angry from Saddam Hussein’s time so everybody wanted to vote for their identity,” she said, explaining the attraction of the Shi’ite and Kurdish blocs. This time, she says, issues will be more important.