Freedom for Egyptians posting today titled “Egypt After the Fall of Baghdad” is an excellent admission of the political changes felt even in Egypt, since the fall of Baghdad.

The ‘shock and awe’ of the fall of Baghdad is still being felt today.

Another democratic vote, for another Mideast country. 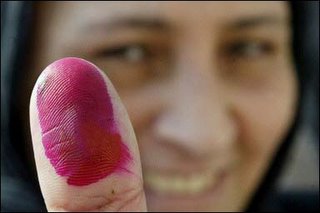 An Egyptian woman shows her thumb, marked by red ink, after voting at a polling station in Cairo, November 15, 2005. Egypt’s Muslim Brotherhood said it had won 34 seats in the first phase of legislative elections, a major advance for the banned but tolerated Islamist group. (AFP/Khaled Desouki)

Freedom for Egyptians also has great pictures from the election, yesterday.

* Successful elections twice in Iraq
* Successful elections twice in Afghanistan
* Violence free (for the most part) change of government in Lebanon
* Democratic Elections in Palestine
* Pardons for jailed democracy reformists in Saudi Arabia
* Women rights guarantees in Kuwait
* Movement in Egypt towards reform
* Reform in Libya
* Historic talks between Israel and Pakistan
* Israel pullout from Gaza
* Massive Protests against Al Qaida in Morocco
* Protests against Al Qaida in Jordan
* Saudi Arabia lifts economic boycott on Israel
* Saudi Arabia open to talks on allowing women to drive
* Women are no longer publicly stoned in Afghanistan
* Women hold more than the allotted 25% of the seats of parliament in Afghanistan.

Yesterday’s vote sent more members of the Muslim Brotherhood to parliament. The brotherhood doubled their seats in parliament. The election saw some violence but there have so far been no complaints on the overall voting process. Earlier this year, opposition candidates were allowed to run up against 77 year old President Mubarak.

No word yet on how Coptic Christian woman Mona Makram Ebeid did at the polls.