PRESIDENT BUSH IS WELCOMED WITH GREAT APPLAUSE AT THE NAVAL ACADEMY,
VIDEO HERE

National Strategy for Victory in Iraq

“The United States has no intention of determining the precise form of Iraq’s new government. That choice belongs to the Iraqi people. Yet, we will ensure that one brutal dictator is not replaced by another. All Iraqis must have a voice in the new government, and all citizens must have their rights protected.

Rebuilding Iraq will require a sustained commitment from many nations, including our own: we will remain in Iraq as long as necessary, and not a day more.”

Has the plan really changed that much in two years? 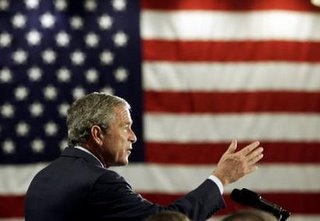 The Enemy In Iraq

A Clear Strategy Begins With An Understanding Of The Enemy In Iraq.

* Rejectionists.
* Saddamists Or Former Regime Loyalists.
* Terrorists Affiliated With Or Inspired By Al-Qaida

Progress Has Resulted Because Of Changes Made In Helping Train Iraqi Troops.

The Coalition Is Helping Iraqis Build The Institutions They Need To Support Their Forces.

As Iraqi Forces Become More Capable, The Mission Will Continue To Change.

Pulling Out The Troops Before They Have Achieved Their Purpose Is Not A Plan For Victory.

The President Will Settle For Nothing Less Than Complete Victory In Iraq.

Victory will come when the terrorists and Saddamists can no longer threaten Iraq’s democracy, Iraqi Security Forces can provide for the safety of their own citizens, and Iraq is not at risk of becoming a safe haven for terrorists to plot attacks against America. As progress is made toward victory, Iraqis will take more responsibility for their security and fewer U.S. forces will be needed. Iraq will not be left to the terrorists. Iraq will be a free nation and a strong ally in the Middle East – and this will add to the security of the American people.

THE WHITE HOUSE LAYS OUT A PLAN FOR TROOP WITHDRAWAL FROM IRAQ,
BBC VIDEO HERE

This was a terrific moment for our country. It is too bad that the Far Left and media allies are left frothing at the mouth at the great Iraq freedom story.

I don’t get it? Will the Left only be happy if America loses? Is that what they want? That is just so foreign to me… just too nutty.

It is much less taxing on the soul to be a conservative and get great joy in seeing democracy and freedom spread in the world.