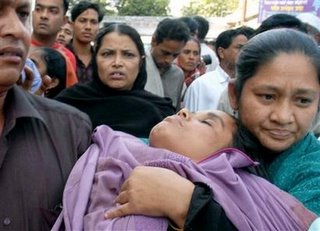 Relatives carry an injured lawyer’s wife who fainted outside a hospital in Gaizipur, about 32 kilometers (20 miles) north of capital Dhaka, Bangladesh, Tuesday, Nov. 29, 2005. A series of bombs exploded in two Bangladesh cities Tuesday, killing at least six people including two alleged bombers and two policemen, and injuring at least 66, in what appeared to be the latest in a string of attacks by militant Muslims intent on imposing harsh Islamic law in the country. (AP Photo/Pavel Rahman)

Suicide bombers hit at two court houses in Bangladesh where lawyers were to prosecute those Islamists involved in recent blasts:

Nine people were killed and 65 wounded by suspected suicide bombers in two Bangladesh cities on Tuesday, apparently the latest in a wave of attacks by militants fighting to turn the country into a sharia-based Islamic state.

Police said three people, including two officers, were killed and 15 wounded by blasts at a checkpoint outside a court building in the port city of Chittagong. They said the third person who died was believed to be the bomber.

Lawyers said the militants were apparently trying to scare legal professionals before courts began trials of hundreds of detained Islamists for suspected involvement in recent blasts.

He said the blasts were probably the work of suicide bombers, who had explosives strapped to their bodies or hidden in bags. 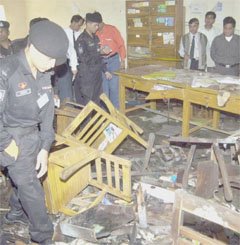 Security personnel inspect the courthouse after a bomb exploded in Gaizipur, about 32 kilometres north of the capital of Dhaka, Bangladesh. (AP Photo/Pavel Rahman)

The suicide bombing is a significant “step up” for the the Islamic extremists in Bangladesh:

No group has claimed the blasts. Police are blaming a banned Islamic group.

The BBC’s Roland Buerk says if the Gazipur blast is confirmed as a suicide attack it would mark a significant stepping up of a campaign by militants.

Bangladesh police chief Abdul Qaiyum told the BBC that, if confirmed, it would be the country’s first suicide bombing.

“The attackers seem to have changed their strategy,” he said.

Mr Qaiyum said the attacker had entered the bar library in Gazipur wearing a lawyer’s black gown in a bid to evade police security.

Rezwan, a terrific blog from Bangladesh has more on the story including this:

After the so called Islamic militants jihad against the court in a bid to kill man-made law and establish their version of Allah’s law (you get the flavor of it by now) they are now concentrating on schools. Students of Khilgaon High School busy with final examination were panicked when a bomb-like device was set in the school and a letter signed by the banned Islamic outfit Harkatul Jihad, Khilgaon unit threatened:

“If Islamic education as per the Quran and Hadith was not introduced in the school within two days, the bombs would be detonated with remote-control.”

Even the foreign missions in Bangladesh were not spared from the threat. Similar threats were communicated to govt. offices, police forces etc.

Gina Cobb has a terrific posting on Bangladesh today.

All Things Conservative has more including a map on the bombings today.

The UK and US missions in Bangladesh have also been threatened. (via Rezwan)