“The worst place I had ever been were the ghettos in Bangladesh. What we saw in Sudan made Bangladesh seem like Beverly Hills.”

“In Sudan, we saw the face of human desperation.”

“This is a swamp area we had to cross. This water was black with tar. It smelled horrible, it was the only thing they had access to drink.” 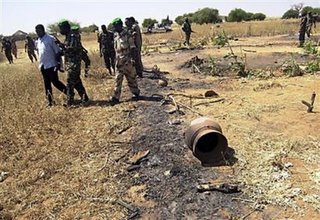 African Union peacekeepers and Sudanese troops walk past the charred remains of a civilian house that was burnt by the Janjaweed militias in Sudan’s western Darfur province. U.S. Deputy Secretary of State Robert Zoellick visited the region on Thursday Nov. 10, 2005 to study conditions on the ground after an spike in violence there led to the first ever casualty among the peacekeepers and forced the U.N. to stop using road transportation in the most volatile areas. (AP Photo/Abde Raouf)

President Bush has a grand opportunity this week to confront the Chinese in their role of protecting the Sudanese government from UN sanctions:

As Sudan’s largest customer for oil, one of its largest suppliers of arms, and one of its staunchest allies on the U.N. Security Council, China is uniquely positioned to press the Sudanese government for real action to halt the carnage in Darfur. The Sudanese government and its paramilitary allies, the Janjaweed militias, have killed at least 180,000 innocent people, driven 2.5 million people from their homes, and left 3.5 million without sufficient food to sustain themselves.

While the Sudan government has heeded President Bush’s call to cooperate in the war on terror and with the January 2005 Comprehensive Peace Agreement that ended the two-decade-long Sudan civil war between the Muslim government in the north and Christian and Animist population in the south, it has failed to disarm and disperse the Janjaweed militias responsible for the daily slaughter of civilians. This has steadily worsened a security situation that threatens the Comprehensive Peace Agreement for which Mr. Bush has worked so hard. 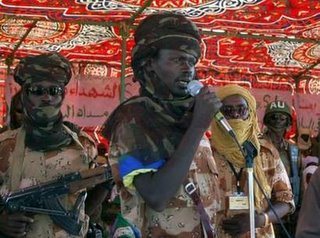 The US has made plans to set up a second consulate in Juba, South Sudan:

The consulate among other issues is well positioned to act as a watchdog and to monitor the implementation of the Comprehensive Peace Agreement (CPA) in its entirety from a closer proximity in the first place, as Washington helped brokered this important agreement, and also to discourage the ruling National Congress Party from its inclination and strong urge of undermining the CPA. This sends a clear signal to Khartoum and its staunch backers elsewhere that it does not at all pay to defy this important document written in blood of Southern Sudanese and other marginalized people in that country.

The presence of this consulate would maintain a pivotal position in promoting massive economic development in a region long excluded from development by deliberate choice. We would certainly expect the Americans to have a centre-stage role in the oil industry in South Sudan. 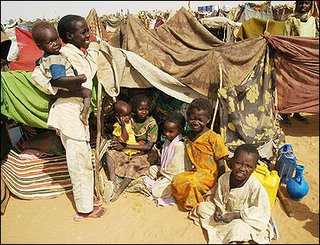 Darfurian children, displaced by the two-year conflict in Sudan’s shattered western province of Darfur, sit outside a tent in Abu Shouk, Sudan. A new US charge d’affaires arrived in Sudan and assumed charge of the embassy, amid fresh efforts by Washington to consolidate a fledgling peace deal in Africa’s largest country. (AFP/File/Salah Omar)