The outrageous sham trial in Uzbekistan has ended.

On May 13, 2005, government forces opened fire on hundreds of innocent protesters in Andijan, Uzbekistan. Government officials organized a massive cover up since that day where several hundred protesters were killed.

Uzbeki officials later arrested 15 individuals and blamed these “criminals” for starting the violence. The Karimov government called the defendants terrorists hoping this would excuse the massacre in the eyes of the world community. After US officials spoke out against the Karimov government, Uzbekistan ended its agreement to allow the US use of an Uzbeki air base in the War on Terror. The sham trial ended today with the sentencing of the 15 accused of the massacre.

The defendants looked awfully calm for just being sentence to 14-20 years for committing a massacre that killed “187” in Andijan, Uzbekistan. In fact the defendants looked eerily stone-faced throughout the trial and even when they took turns standing and reading off their confessions. They appear totally unmoved in regards to their sentencing. 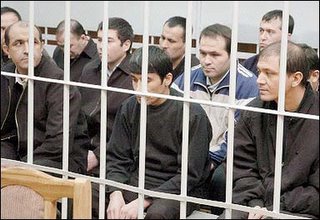 The defendants accused of terrorism, murder of officials and other serious crimes during an uprising in the eastern city of Andijan on May 13 listen in the defendant’s cage during the reading of the court verdict in Tashkent. All 15 defendants have been given heavy sentences, ranging from 14 to 20 years in prison, at the conclusion of a trial rejected by critics as a parody of justice. (AFP)

The 15 defendants arrested after the Massacre in Andijan, Uzbekistan were sentenced to 14 to 20 years in jail earlier this week. The show trial failed to convince the international community.

All 15 defendants accused of leading a revolt in eastern Uzbekistan last May have been given heavy sentences, ranging from 14 to 20 years in prison, at the conclusion of a trial rejected by critics as a parody of justice.

The supreme court’s sentences handed down Monday were virtually identical to those sought by state prosecutors, who had asked for the defendants to serve between 15 and 20 years in jail for their roles in the two-day uprising that began during the night of May 12-13.

Eyewitnesses and independent human rights organizations say hundreds of civilians were killed after Uzbek troops were deployed in the eastern region of Andijan to quell the unrest.

The administration of hardline President Islam Karimov characterized the unrest as an attempt by Islamic radicals to overthrow the government. It says a total of 187 people died, mainly militants and security personnel.

Earlier Monday, the court handed down guilty verdicts for the defendants, accusing them of trying to “overthrow the Uzbek constitutional system in order to create an Islamic state”.

And, with the end of this sham trial in Karimov’s puppet court, the sad story of the Andijan massacre is now buried in the public’s mind just as the many dead were secretly buried at night in the cemetaries outside of Andijan. Time will tell if the world will ever know the real story behind that bloody day in Andijan.

Publius Pundit has been following the story.

And, The Registan has exceptional analysis on this Central Asian crisis.