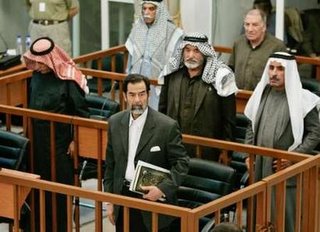 Saddam again appeared defiant in court as his trial resumed and then was postponed today in Baghdad:

After a short session during which the first testimony was read into the record, Chief Judge Rizgar Mohammed Amin adjourned the trial until Dec. 5 to allow time to find replacements for two defense lawyers who were slain and another who fled the country after he was wounded.

Saddam and seven co-defendants are charged in the killings of more than 140 Shiite Muslims after an assassination attempt against the former president in the Shiite town of Dujail in 1982. Convictions could bring a sentence of death by hanging. The former leader pleaded innocent to charges of murder, torture, forced expulsions and illegal detentions at the opening session last month.

A moment of silence was observed in memory of two defense lawyers assassinated since the trial’s opening, and defense attorneys were on hand for the session, despite threats to boycott the hearing to protest the government’s alleged failure to protect them.

Afterward, the court played the videotaped testimony of former intelligence officer Wadah Ismael al-Sheik, who investigated the assassination attempt and who died of cancer soon after making the statement in a U.S.-controlled hospital last month. 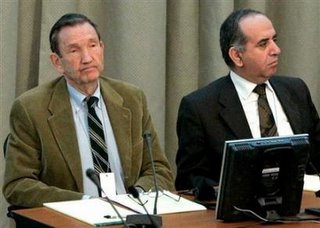 The trial of Saddam Hussein reopened today after a five week absence:

The trial has now heard its first evidence – video testimony from a witness who died recently.

At least four defence lawyers have failed to turn up, although Saddam Hussein’s own lawyer did attend.

It is not clear why the missing lawyers did not appear nor which defendants they represent.

He was similarly argumentative on Monday, complaining about the fact that he had to climb four floors to the courtroom because the elevator was broken.

He also objected to being escorted up the stairs by “foreign guards”.

In a series of heated exchanges with the chief judge he also complained about the fact that his guards had taken his pen away, rendering him unable to sign the necessary court papers:

“I will alert them to the problem,” Judge Amin said in response.

“Don’t alert them! Order them. You are an Iraqi, you are sovereign and they are invaders, foreigners and occupiers,” Saddam Hussein fired back.

Previously on the Saddam Trial:
Surprise! Ramsey Clark to Join Saddam Legal Team
http://gatewaypundit.blogspot.com/2005/06/saddam-preparing-for-trial.html
Saddam’s Top Lawyer Quits
“Team Saddam” Back in Court
“Saddam the Victim”… Are you buying it?
Ramsey Clark Arrives in Iraq, Vows to Save Butcher

It sounds like they are glued to the sets in Iraq.