The men tried to smuggle from Syria 20 tons of chemicals for an attack in Jordan that would have killed 80,000 people. On Sunday, the prosecution urged the judge to consider the death penalty for the men behind the largest planned WMD attack in history.

The chemicals are believed to be VX nerve gas. There were 20 tons of the weapons and explosives captured coming into Jordan from Syria. Syria doesn’t make VX. Saddam Hussein’s Iraq did.

The trial of ring leader Azmi Jayussi and 12 others including Al Zarqawi in abstentia began last December. 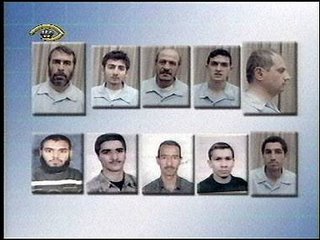 These ten captured Al-Qaida terrorists were on trial in Jordan for attempting to explode roughly 20 tons of chemical weapons with explosives. Authorities captured the weapons coming into Jordan through Syria.

The Daily Times is reporting on the latest developments of this trial today on al Zarqawi and 11 others:

“The prosecutor wrapped up his case in the trial by demanding the maximum penalty (death) for 12 suspects,” a judicial source told AFP.

The nine suspects in the dock, including alleged ringleader Azmi Jayussi, and the fugitives are accused of plotting, on Zarqawi’s orders, an attack on Jordan’s intelligence agency using trucks loaded with 20 tonnes of chemicals.

At least one of the defendants hurled abuse at the prosecutor during closing statements:

As the prosecutor delivered his closing statement one of the defendants, Ahmad Sammik, 24, hurled abuse at the court and Jordan’s King Abdullah II.
“You are the real criminals. Islam will prevail,” he said.

“If you consider the jihad to be terrorism, then, I declare that we are proud to bring terror to your very hearts. The word terrorism is a medal of honour for us,” Sammik said.

“We will continue on this path … until the reign of the king dies,” he added.

Al-Qaida Terrorist Azmi Al-Jayouzi is on trial in Jordan. During testimony in May, Al-Jayouzi threw his shoes at prosecutors when the death of his comrades during a fire fight was discussed. He was captured during the fighting along with a truck load of chemical weapons.

Al-Jayouzi, a follower of Al-Zarqawi, is on trial for planning and attempting to execute a Chemical Weapons attack in Jordan that could have killed as many as 80,000 civilians:

Earlier testimony was interrupted when shoes were thrown at the judges presiding over the trial:

A total of thirteen terrorists, four who are being tried in absentia including Iraqi thug Abu-Musab al-Zarqawi, are on trial for plotting chemical and conventional attacks against government and public buildings in Jordan and elsewhere under the command of al Zarqawi. The Jordanian plot was uncovered and ultimately foiled on April 21, 2004, when the four alleged cell members were killed in a shoot-out with police. From that incident, additional evidence was collected and other cell members arrested, and are now on trial.

In a page from al Qaeda’s playbook, on Wednesday, May 4, 2005, prime suspect Azmi al-Jayousi disrupted the trial by throwing his shoes at military judges during the hearing in Amman, and threatening them with death. He did so to protest the killing of his four co-conspirators in a gun battle with police when the plot was thwarted last year. During the testimony of a medical doctor describing the wounds of the co-conspirators, al-Jayousi took off his slippers and hurled them at the chief judge, Colonel Fawaz Buqour, while shouting “Abu-Musab al-Zarqawi will chop off your heads and stuff it up your mouths, you God’s enemies,” pointing his finger at the three-man tribunal.

Another defendant, Ahmad Samir, shouted “The blood of our brothers will not go wasted.” “Await death, Obeidat, for you are God’s enemy,” he roared, addressing the military prosecutor, Lt. Col. Mahmoud Obeidat. 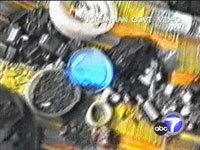 Ringleader, Al Jayousi confessed to the court in May on his contacts with Al Zarqawi:

Al-Jayousi said he received about $170,000 from al-Zarqawi to finance the plot and used part of it to buy 20 tons of chemicals. He did not identify the chemicals, but said they “were enough for all the operations in the Jordanian arena.”

Images of what the commentator said were vans filled with blue jugs of chemical explosives were included in the broadcast.