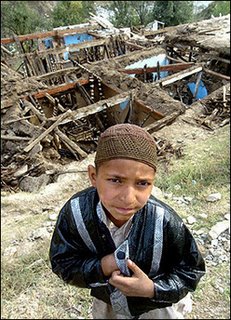 A Pakistani quake survivor stands in front of collapsed houses after a massive earthquake in Batagram. Pakistan has raised its death toll from last month’s catastrophic earthquake to more than 73,000, making it one of the deadliest tremors in recent history. (AFP)

Pakistan on Wednesday raised its death toll from last month’s catastrophic earthquake to more than 73,000, making it one of the deadliest tremors in recent history.
The new figure was a jump of more than 16,000 from the number given on Tuesday and the United Nations has warned it could rise still further unless the international community gives more cash to relief efforts.

“There are 73,276 dead and 69,260 injured” from the 7.6 magnitude quake that struck on October 8, disaster relief commissioner chief Major General Farooq Ahmad Khan told a news conference in Islamabad.

The US said that one of its helicopters delivering aid to the victims was fired upon yesterday:

“A United States Army CH-47 Chinook helicopter flying in the vicinity of Chakoti delivering relief aid to earthquake victims, is believed to have been fired upon by a rocket-propelled grenade today (Tuesday), around 1:45pm,” the US military said in a statement issued here by the US embassy.

“The aircraft was not hit and returned safely with its crew without further incident to Chaklala Air Base around 2:30pm,” the statement said.

Investigations will be carried out into the reported attack of RPG rocket on a US chopper flying over Azad Kashmir with the help of Pakistan, said the US military.
However, the Chief Spokesman of Pakistan Army, Maj General Shaukat Sultan denied any rocket attack against a US helicopter, which was flying over Chakoti sector.

He said two US helicopters were flying over Chakoti sector when a dynamite blast was made to open a blocked road, adding that one of the pilots perhaps took it for a rocket attack and altered back its direction.

And, after 21 days under the rubble a man was rescued on Tuesday!

A Pakistan Army team rescued a man after 21 days from under the rubble of a collapsed house in remote area of district Battagram, an official of Ayub Teaching Hospital said on Monday. On October 29 the army team dug out a man from the debris in Gangwal village of teshil Allai in Battagram district. The lucky survivor, Said Rehman, was unconscious because of dehydration and hunger, but his life was out of danger, hospital officials say.

Jim Hoft
Jim Hoft is the founder and editor of The Gateway Pundit, one of the top conservative news outlets in America. Jim was awarded the Reed Irvine Accuracy in Media Award in 2013 and is the proud recipient of the Breitbart Award for Excellence in Online Journalism from the Americans for Prosperity Foundation in May 2016.
THOUSANDS Rally for President Trump in Beverly Hills, California (Video)
Larry C. Johnson: Joe Biden – The Art of the Steal and China Deal
New Text Messages Show Joe Biden Reaching Out to Hunter's Associates for Financial Help for His Son -- After He Said This Never Happened
UPDATE: Twitter Suspends TGP and Bans New Report with Photo of Hunter Biden Smoking Crack with Link to Foot Sex Video -- Twitter and Facebook Suspend Anyone who Reposts TGP Reporting -- Just Like in Communist China!
BREAKING: China's GTV Releases Two More Videos of Hunter Biden -- Sex Selfies from Laptop -- Videos 3 and 4
See more...