Hillary Clinton made a trip to the Western Wall in Jerusalem, a stop in Jordan and dragged Bill and even 23 year old Chelsea with her, just as she did in 1999.

A peck on the cheek for Suha. 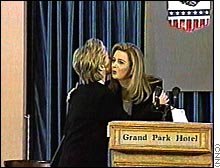 After Suha Arafat in 1999 just claimed that Israelis were poisoning the Palestinian water, Hillary greets her with a kiss. (CNN)

As she ended a two-day trip to Israel and headed to Jordan, U.S. first lady Hillary Rodham Clinton urged Israelis and Palestinians to refrain from “making inflammatory charges” that could derail the peace process.

Clinton, accompanied by her daughter, Chelsea, issued a written statement shortly after visiting the West Bank on Thursday with Suha Arafat, the wife of Palestinian Authority President Yasser Arafat. Her message was prompted partly by comments made by Suha Arafat at the dedication of a U.S.- funded health program.

Suha Arafat accused the Israelis of inflicting environmental and health damage on Palestinians during their more than 30- year occupation. She said Israel had contaminated about 80 percent of water sources used by Palestinians with “chemical materials,” thereby causing an increase in Palestinian cancer cases.

In 1999, Hillary assured the world that her visit was not a politically motivated trip:

Hillary Clinton made more than a dozen appearances in Israel this week. The first lady, who may run for the U.S. Senate next year from New York, said Thursday that the Mideast trip is not politically motivated. “I am here as the first lady of the United States,” she said.

An article in the Jerusalem Post by its New York correspondent said, “[N]obody takes seriously Hillary Clinton’s claim that her visit [to Israel] this week was strictly a personal trip.” The article said that winning the Jewish vote is critical for Clinton. 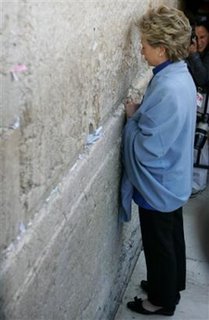 Today, Hillary was back at Jerusalem’s Western Wall:

A blue shawl draped around her shoulders, Clinton spent a few solitary moments before the massive structure, while her male security detail stood on the sidelines, barred from the exclusively women’s portion of the holy site.

Clinton did not reveal the content of the note she slipped in the wall. Many Jews believe that pleas placed between the stones of the holy site will be answered by God.

The Anchoress describes the Clinton’s hand-holding visit to Jordan this weekend.