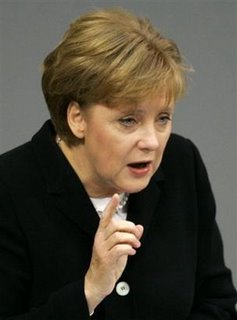 German Chancellor Angela Merkel sets out her government’s agenda as she makes her first major parliamentary speech in Berlin Wednesday, Nov. 30, 2005, since becoming the country’s leader. Merkel said Wednesday she aims to get Germany’s economic growth back among the top three in Europe, sending a signal of optimism as she set out her new government’s program. (AP Photo/Franka Bruns)

German chancellor Angela Merkel says she will not be “blackmailed” by the kidnappers of a German woman in Iraq who have threatened to kill her.
But she said her government is doing “everything in its power” to rescue 43-year-old Susanne Osthoff and her driver, who were seized on Friday.

The kidnapping is her first major test as German leader, and her comments came in her first speech to parliament.

She has also been setting out her plans to tackle Germany’s economic problems.

But Mrs Merkel began her speech by focusing on the kidnapping of archaeologist Susanne Osthoff.

The Pro-American Merkel says that Germany will not be blackmailed by terrorists:

At the outset of her first major speech to parliament since replacing Gerhard Schroeder as German leader last week, Merkel focused on the case of a German archaeologist held hostage in Iraq since Friday and threatened with death.

“This government, this parliament will not let itself be blackmailed,” Merkel said, calling international terrorism one of society’s biggest challenges.

“It (terrorism) is directed at everything that is important to us, at the core of our civilisation. It is directed against our entire value system.”

Now that is a refreshing sound! She has her work cut out for her as she aims to boost Germany’s sluggish economic growth and tackle 11% unemployment. But, German Chancellor Angela Merkel is out of the blocks and talking tougher than the man she replaced.

Davids Medienkritik must be pleased.