After months of build up, “12” anti-war protesters were arrested today from the ditch formerly known as Camp Casey. “12” others decided pack up their pup tents and leave the ditch peacefully.

The former “Camp Casey” ditch is now off limits to protesters. 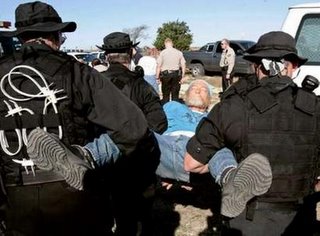 An anti-war protester is carried away by McLennan County sheriff deputies after being arrested near U.S. President George W. Bush’s ranch in Crawford, Texas, November 23, 2005. A dozen people were arrested for criminal trespassing as they demonstrated against the president’s stance on troops in Iraq. (REUTERS/Jim Young)

A dozen war protesters including Daniel Ellsberg were arrested Wednesday for setting up camp near President Bush’s ranch in defiance of new local bans on roadside camping and parking.

About four hours after the group pitched six tents and huddled in sleeping bags and blankets, McLennan County sheriff’s deputies arrested them for criminal trespassing. Many in the group held up signs, including one that said “Give me liberty or give me a ditch.”

A dozen or so other demonstrators left the public right of way after deputies warned them they would be arrested.

The protest was set to coincide with Bush’s Thanksgiving ranch visit.

The arrests were made by more than two dozen deputies who calmly approached the demonstrators in their tents and asked if they wanted to walk out on their own or be carried. Two chose to be carried. They were to be taken to jail for booking.

Something to be proud of:

Ellsberg, the former Defense Department official who leaked the Pentagon Papers during the Vietnam war, estimated it was his 70th arrest for various protests since the 1970s.

There is no word on fire ant activity in the ditch today.

What’s with the Betsy Ross flag? 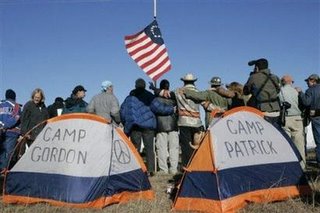 Gee, maybe I’ll pitch a tent in a ditch tonight and call it, “Camp Jim!” 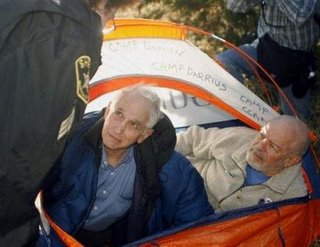 Anti-war protestors Dan Ellsberg, center, 74, of Berkley Calif. and Dan Myers, right, 74, of Edmond, Okla. are given a final warning by a McLennan County Sherrif before being arrested for camping in a county ditch, Wednesday, Nov. 23, 2005, in Crawford, Texas. A dozen war protesters were arrested Wednesday for setting up camp near President Bush’s ranch in defiance of new local bans on roadside camping and parking. (AP Photo/Matt Slocum)