Government Investigators say that Zamanbek Nurkadilov shot himself two times in the chest and then once in the head in a suicide. Elections are scheduled for next week, on December 4th. 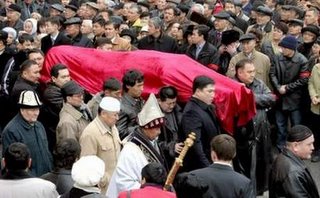 People gather for the funeral of killed Kazakh opposition figure Zamanbek Nurkadilov in Almaty November 15, 2005. Nurkadilov, an outspoken critic of Kazakh President Nursultan Nazarbayev, was found shot dead in his house late on Saturday. The killing, the opposition said, clearly had political overtones in the run-up to next month’s presidential elections. (REUTERS/Pavel Mikheev)

A former deputy of the ruling government, Nurkadilov was outspoken against the government:

The official investigation into the shooting death of Kazakh opposition figure and former Emergency Situations Agency head Zamanbek Nurkadilov has concluded that he committed suicide.

The investigative team found that Nurkadilov first shot himself twice in the chest before putting the gun to his head and firing a bullet into his brain.

Interfax quoted an unnamed Kazakh law-enforcement official as saying that investigators concluded that the main reason why Nurkadilov shot himself related to family conflict.

Nurkadilov was found dead on 12 November. The For a Just Kazakhstan bloc has declared that Nurkadilov’s death “without any doubt can be qualified as political.”

A former mayor of Almaty and government minister, Nurkadilov later joined the opposition and accused the government of corruption.

His widow is not convinced:

On Nov. 13 Nurkadilov was found dead by his wife at their home in the capital Almaty with two gunshots to his chest and one to the head. Kazakh investigators refuse to rule out suicide. Police said there was no evidence of a break-in.

On Thursday his widow Makpal Zhunusova called a news conference during which she showed reporters what she and her lawyer said was an illegal listening device, which she found hidden in her dwelling the previous day. Zhunusova said that she believed that police agents searching her house earlier in the week probably planted the bugging device.

Nurkadilov had served as a parliamentary deputy, administrative head for Almaty and the surrounding region, and head of the government’s emergency situations department. In March 2004 he suddenly accused the administration of President Nursultan Nazabayev of massive corruption, and was gathering information on the first family to support allegations that they had illegally acquired many state properties and enterprises.

The Registan has much more on the Central Asian situation.