John Kerry had his “Magic Hat” and Jimmy Massey has his “Magic Flap”!

John Kerry, along with Jane Fonda, led the fight against the US in the Vietnam War. Today, John Kerry’s protege, Jimmy Massey, is wanting to lead the charge against his country in the current Iraq War. And, like his role model, Jimmy Massey is having trouble flip-flopping his stories. 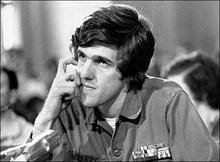 Not long after returning from Vietnam, John Kerry began telling people he had been sent into Cambodia on an illegal patrol on Christmas Eve 1968. He repeated that story on the floor of the Senate in 1986, to an AP reporter in 1992, and as recently as June 2003 was regaling a Washington Post reporter with a story of how he had ferried a CIA man secretly into Cambodia, and how he’d kept the man’s “hat”, as a reminder of that journey. At times, John Kerry would display an old hat from his brief case as he told this story.

The Christmas-Eve-in-Cambodia story has already been completely shredded by the SWIFT boat vet critics of Kerry, and it is hard to imagine how Kerry is going to defend the CIA man who was never there, given independent testimony from Navy vets that the SWIFT boats never went into Cambodian waters. If Kerry was sent on a secret drop-off mission, he’s going to have to come up with some proof, especially with the Christmas Eve narrative now so discredited.

Fast forward 34 years,… Jimmy Massey begins telling the elites in France, the Arab media and western news outlets his own Magic “innocent protester story” that has kept changing and growing and twisting and backtracking over time. 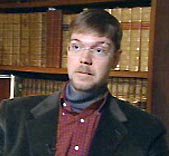 Massey told a version of the story before an immigration hearing in December in support of an American soldier trying to flee to Canada. Then, Massey said he and the Marines killed four of the demonstrators. In other interviews, he said the Marines shot at 10 demonstrators and killed all of them but one, whom he let crawl away.

In interviews with more than a dozen Marines and journalists who were in the military complex that morning, none can recall such an incident.

Here is another version of the innocent protester story in Jimmy’s own words:

Brit Hume from FOX News Special Report had this to say about Jimmy Massey and the innocent civilians on Monday night’s Grapevine segment:

Former Marine Staff Sergeant Jimmy Massey has become a hero of the anti-war left, appearing in national news stories and giving speeches on atrocities he says he and other Marines committed in Iraq, including killing peaceful protesters, shooting a 4-year-old Iraqi girl in the head and filling a tractor-trailer with the bodies of civilian women and children killed by American artillery.

But after interviewing more than a dozen Marines and journalists present when these events supposedly took place, the St. Louis Post-Dispatch reports no one can recall the incidents Massey describes. And Massey himself tells the paper that despite giving first person accounts, he never witnessed the events he describes in person, but was told about them by other marines.

But, this is not what he said in the above video!

Jimmy said his own men mowed them down right in front of his own eyes!

Isn’t this a bit different than what he said to the immigration board?

For months now, Jimmy Massey has been out on the Anti-War speaking tour describing so-called atrocities by American soldiers. On Sunday Ron Harris of the St. Louis Post Dispatch wrote about Jimmy Massey’s stories and pointed out his many inconsistencies:

Massey’s claims have gained him celebrity. Last month, Massey’s book, “Kill, Kill, Kill,” was released in France. His allegations have been reported in nationwide publications such as Vanity Fair and USA Today, as well as numerous broadcast reports. Earlier this year, he joined the anti-war bus tour of Cindy Sheehan, and he’s spoken at Cornell and Syracuse universities, among others.

News organizations worldwide published or broadcast Massey’s claims without any corroboration and in most cases without investigation. Outside of the Marines, almost no one has seriously questioned whether Massey, a 12-year veteran who was honorably discharged, was telling the truth.

Jimmy also made these other videos…

JIMMY MASSEY SAYS WE SHOT A MAN WITH HIS HANDS UP,
VIDEO HERE

And, his words have been reprinted hundreds of times by organizations like Islam Online who printed these quotes from Jimmy Massey:

Massey cited instructions of commanders disregarding lives of Iraq civilians as one of many reasons still driving him nuts.

“Throw candies in the school courtyard, and open fire on children rushing to snatch them. Crush them,” he recalled officers as saying during drills.

Jimmy Massey has done a great disservice to this country during a time of war. It is about time he stopped with his destructive “magic” stories that are proving to be untrue!

Here is what “Not a ChickenHawk” wrote in to say on Jimmy Massey:

Not a ChickenHawk, about to deploy on my third tour to Iraq with the 4th ID. For the moron several comments above: anyone who makes up stories about his fellow Marines killing civilians and conducting war crimes is, by definition, anti-military. That you cannot see something so completely obvious shows a lack of mental capacity on your part, not a bit of irony on the part of any conservative. There can be only two reasons why this dirtbag is making up these stories. He’s on his way to declaring candidacy for some office as a Democrat, or he’s just anti-military. And even if it is the first reason, he’s surely smart enough to know that he’s increasing his chances of getting elected as a Democrat by being anti-military. The lefties who would sup
port for such a fraud are those who believe that Massey may be a lying sack of sh*t, but he’s anti-American, and that’s enough to get their support.

I agree with the notion that this ex-Marine needs to be hauled back under UCMJ, charged with the crimes he’s already admitted to, and jailed.

Previous Posts on Jimmy:
Cindy Sheehan’s Anti-War Marine is a Fraud!
Jimmy Massey & John Kerry Have Too Much in Common

Michelle Malkin has been leading the internet on this story and mentioned Jimmy Massey in a posting last year.

Allman and Smash in the morning at 97.1 FM have been following this story. I was able to share my thoughts with them and their listeners earlier today.

Ron Harris has never so much as called Jimmy Massey on the telephone or attempted to send Jimmy Massey an email until he called several weeks ago to tell Jimmy to retract all his claims or be “exposed.” The reason I bring that up is that two days ago, Harris published an ambush piece on Jimmy Massey, a year and a half after Massey dissed Harris on his Resheed battle story, and just one month after the release of Massey’s devastating book, Kill Kill Kill, relating his experiences in Iraq, and naming names.

This should be interesting! I am going to see if Ron Harris has a reply for Mr. Massey.

Eyes on the Ball has an interview Massey did promoting his book, “Kill, Kill, Kill”.