Last night it was Minnesota, tonight the Ethiopians will be out in LA to protest Jimmy Carter! 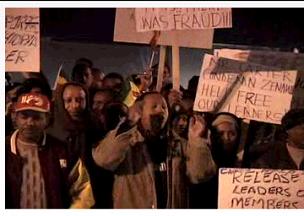 Ethiopians came out in the cold Minnesota weather to protest Jimmy Carter last night at his book signing. The protesters are angry at his Carter Institute for certifying the faulty Ethiopian election this year before the ballots were even counted. (GP)

The ex-president Jimmy Carter signed books at an Edina, MN bookstore as angry Ethiopians protested outside:

Carter, who since leaving the presidency has worked to further human rights and democracy, was criticized by a crowd of at least 40 Ethiopians protesting outside the store for his involvement with that country’s elections this year.

Carter helped monitor the elections, with his Carter Center staff authoring a generally favorable report of the process, though it singled out problems and condemned post-election violence. The protesters, many of them Ethiopian Americans, urged Carter to take a more aggressive stand against the leaders of Ethiopia.

After the election in Ethiopia and after Jimmy Carter had flown back to the states, several hundred Ethiopians took to the streets to protest for democracy. Police opened fire on crowds in Addis Ababa in June, killing at least 37 people and heralding a massive crackdown on the opposition. Fresh violence erupted on Tuesday, November 8, 2005, leaving at least 46 people dead.

Several thousand Ethiopians protested in Washington DC last week from all over the US. 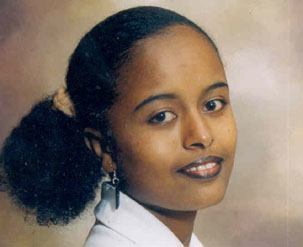 ShiBire Desalegn is the first person to be killed when Meles Zenawi unleashed his forces following a peaceful protest by Addis Ababa University (AAU) students on June 6. She was shot and killed by EPRDF troops as she and her friends tried to block the road in Kotebe that leads to the Sendafa torture camp.

Ethiopian Review spoke with ShiBire’s mother after her death:

Ayelech Birkneh is devastated by her daughter’s sudden death. As the bread winner of the family, the 21-year old ShiBire was supporting her mother and six teenage siblings. The father passed away, leaving only a 50 birr monthly pension.

ShiBire could not continue her education, because there was nobody else to support the family. Her income was not enough to support the whole family even though she worked hard. The only choice she had to generate enough income was to go to a foreign country looking for a job.

People in ShiBire’s neighborhood appreciate what she did and died for. 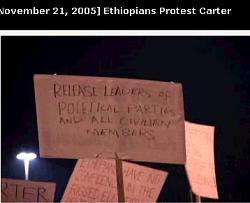 The Ethiopian protesters said Jimmy sped away to avoid them:

The Ethiopian community demonstrated for about 2 hours until President Carter’s entourage sped away to avoid us. He was not able to slip away before he had a chance to see and hear us. There were approximately 100 of us demonstrating tonight and we were very vocal and were able to make our case to the public through two TV stations. Another successful demonstration. We hear President Bush is coming here on Dec 9 and we will be ready.

Tonight Jimmy is in LA and the Ethiopians are planning on greeting him there:

The book store has started to give out wristbands at 10 am and will continue do so until 4 pm today. Only those with wristbands will be allowed to be in the line. This is a great opportunity for Ethiopians to aggregate in front of the Borders to remind the former President of the ever deteriorating political conditions in Ethiopia.

President Carter was signing his latest book in MN yesterday, and a number of Ethiopians staged a demonstration and appealed to him end his silence about the state-sponsor terror in Ethiopia.

Ethiopians in the Los Angles Area can have a similar opportunity to get the attention of President Carter.

President Jimmy Carter was at a book signing tour on Sunday, November 20, 2005 at the Barnes & Noble, Edina at which he was greeted by angry demonstrators over his center’s early pronouncement of the polls in favor of the ruling party. Carter center was one of the election observing bodies and is remembered to have issued a report declaring the ruling party the winner of the 2005 [election] despite the larger EU observer missions preliminary report that cast major doubt and declared the elections “not free and not fair” when gauged against widely accepted international standards. 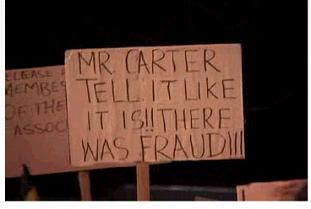 If you would like to join the Ethiopians in their democracy protests Ethiopian Review is keeping up to date on Jimmy Carter’s book signings.

Ethiomedia is also carrying the latest news on Ethiopia.