“The law must be applied in a spirit of dialogue and respect.”
French President Jacques Chirac

“69 Cars” Torched in “9 Towns” on Tuesday!
France-Info said about 150 fires were burning in suburbs of the Seine-Saint-Denis region. 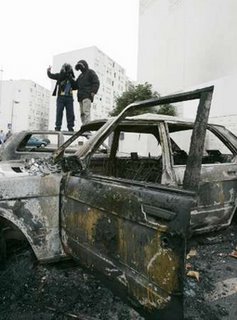 Youths stand on the roof of a vehicle that was set ablaze overnight in the northeastern Paris suburb of Sevran November 2, 2005. Dozens of vehicles were set ablaze and 34 people were detained by police in a sixth night of rioting as street fighting spread in the poor suburbs ringing the eastern side of the French capital. (Reuters)

French Interior Minister, Nicolas Sarkozy, is being blamed for the spreading riots in poor Paris suburbs:

French Interior Minister Nicolas Sarkozy defended his tough anti-crime policies on Monday after a fourth night of riots in a Paris suburb in which tear gas was fired into a mosque during evening prayers.

Sarkozy vowed to investigate the tear gas incident and repeated his “zero tolerance” policy toward violence that began when two teenagers were electrocuted to death after clambering into a power sub-station while apparently fleeing police.

Overnight youths hurled rocks and set fire to cars in the northeastern Clichy-sous-Bois suburb of the French capital, where many immigrants and poor families live in high-rise housing estates notorious for youth violence.

“I want these people to be able to live in peace.” Sarkozy told reporters as he mingled with local residents outside the Seine-Saint-Denis prefecture in Bobigny, which oversees Clichy-sous-Bois.

“For 30 years the situation has been getting worse in a number of neighbourhoods,” he said, honing his theme of the need for a break with past policies that underpins his strategy for 2007 presidential elections.

“I am perfectly aware that it is not in three days or in three months that we will make up for 30 years,” he added, pledging to crack down on gangs and drug dealers.

Sarkozy, who made his name by cutting crime figures during a first stint as interior minister from 2002 to 2004, later discussed the unrest with Prime Minister Dominique de Villepin, a potential rival in the 2007 race.

Tim Blair has more on the “City of Light”, including this:
“Since the start of the year, 9,000 police cars have been stoned and, each night, 20 to 40 cars are torched.” 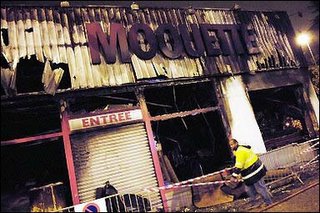 Violence broke out as French top officials were having talks with the relatives of the victims:

Both met relatives of victims, police officials and community leaders on Tuesday in an effort to calm tensions. But fresh violence broke out even as the pair opened talks, and spread to new parts of Paris.

Police said as many as 69 cars were set on fire on Tuesday night in nine towns in the Seine-Saint-Denis region, home to many impoverished communities.

The original flashpoint of Clichy-sous-Bois, where police were out in force, was calmer, but trouble flared in nearby areas.

Correspondents say anger grew after a tear gas canister was hurled into a mosque in Clichy-sous-Bois on Sunday night. Emotions have also been fuelled by mass arrests.