This is one powerful and historic chapter in the Bush Presidency!

George and Laura Bush received a standing ovation as they entered the Gangwashi Christian Church in China today. 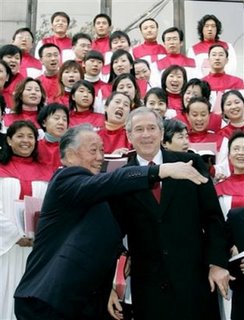 President and Laura Bush took a front row seat to a standing ovation at the Gangwashi Christian Church in China today:

“It wasn’t all that long ago that people were not allowed to worship openly in this society,” the president said after the hourlong service. “My hope is that the government of China will not fear the Christians who gather to worship openly. A healthy society is a society that welcomes all faiths.”

In a day of talks, the president was expected to trumpet a trade concession from China. He also was to prod Chinese leaders about currency system changes, human rights and the piracy of American movies, computer programs and other copyright material. Bush also was seeking China’s cooperation on North Korea, Iran, Syria and other trouble spots.

Bush, however, chose to make the worship service his first public event during a two-day state visit to China. The significance of Bush’s visit to the church, a modest marble-and-brick building tucked off an alley, was clear to the congregation of about 400.

Bush received a standing ovation when he entered the sanctuary, which looked much like a classroom with wooden movie theater seats. There was more applause when the pastor announced his presence, and members of the choir assembled outside to see Bush off afterward.

Earlier this year Bishop Xie, a Catholic Bishop who had been arrested for “loyalty and obedience to the Pope” and held in jail for several years passed away in China.

A Chinese blogger, Shi Tao was arrested in January in China for posting an official document relating to the June 1989 Tiananmen Square massacre on a foreign website.

Some 25 journalists and 62 cyberdissidents are currently imprisoned in China as of December 2004. 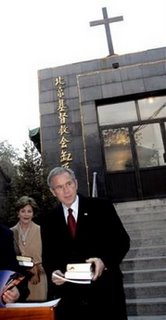 President Bush wanted to show his support for religious freedom in China:

The US evangelical Christian movement meanwhile wants Mr Bush to push China on human rights and freedom of worship, says the BBC’s Adam Brookes, who is travelling with the president.

A key Bush aide said Mr Bush would speak to the Chinese leader about “giving more opportunities for Chinese citizens to worship and speak freely.”

Speaking in Japan earlier on his tour, Mr Bush urged China to allow more political freedom and pointed to Taiwan – considered a renegade province by Beijing – as a model of a society that has successfully moved from “repression to democracy.”

Chinese journalists Shi Tao, Zhang Lin and Huang Jinqiu are in jail today because they wrote or distributed essays that offended the political leadership.

Stefania at Free Thoughts also noticed that President Bush encouraged the Chinese Authorities to invite the Dalai Lama to China for talks.

Joshua at One Free Korea explains what happened to disappoint activists during Bush’s stop in China.