* Continued to threaten Israel with extinction
* While it presses the UN with human rights and diversity legislation(?)
* Admitted to continued uranium conversion
* Claimed that it can now spy on Israel

Iran continues to threaten Israel with extinction which is even less comforting now that they are going ahead with the uranium conversion. 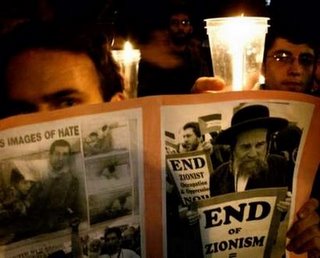 Iranian protesters hold placards against Zionism during a protest to commemorate the anniversary of the death of Edoardo Agnelli, son of Gianni Agnelli, the owner of Fiat company, in front of the Italian embassy in Tehran November 15, 2005. The protesters believe Edoardo was killed by Israel following his conversion to Islam. (REUTERS/Morteza Nikoubazl)

Today Iran claimed that it can now spy on Israel by satellite.

Iran said the satellite would be purely scientific. But a month after its launch — and only weeks after the president said Israel should be wiped off the map — the head of Tehran’s space program now says the Sina-1 is capable of spying on the Jewish state.

The launch of the Russian-made satellite into orbit aboard a Russian rocket last month marked the beginning of Iran’s space program. Officials say a second satellite — this one Iranian-built — will be launched in about two months, heightening Israeli concerns.

The Sina-1’s stated purpose is to take pictures of Iran and to monitor natural disasters in the earthquake-prone nation. Sina-1, with a three-year lifetime, has a resolution precision of about 50 yards.

But as it orbits the Earth some 14 times a day from an altitude around 600 miles, with controllers able to point its cameras as they wish, Sina-1 gives Iran a limited space reconnaissance capability over the entire Middle East, including Israel.

Iran continued to threaten Israel in protests this weekend as it presented the UN with a signed petition promoting cultural diversity and Human Rights:

Iran on Tuesday stressed the importance of preserving cultural diversity and upholding human rights in societies of the world.

The Islamic Republic here on Tuesday presented a draft resolution to the Third Committee of the UN General Assembly. It was among 17 that were discussed by working committees on different fields.

Iran’s representative to the committee, Mostafa A’laei, said here Tuesday that several international and non-state organizations were wrongly trying to confuse cultural diversity with a tolerance for activities and values they were promoting.

“Besides the UN General Assemby, the UN Educational, Scientific and Cultural Organization (UNESCO) has also made considerable efforts to define cultural diversity within the concept of legal systems,” he added.

Iran’s draft resolution, signed by some 40 states, highlighted the importance of maintaining religious and cultural diversity in society in the interest of promoting international peace and security and the prosperity of human beings.

It also called on the UN High Commissioner for Refugees (UNHCR) to pay attention to the aspect of cultural diversity in its defense of human rights for all societies.

Now, call me crazy but doesn’t that directly conflict with their stand on Israel?

And, figure this one out… 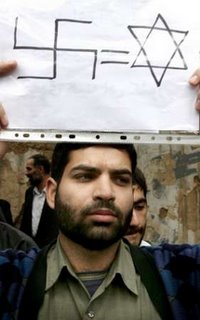 An Iranian student holds a placard during a demonstration in front of the Italian Embassy in Tehran, November 3, 2005. A few dozen people chanted anti-Israel slogans outside the Italian embassy in Tehran on Thursday in protest at Italian criticism of Iran’s policy towards the Jewish state. (REUTERS/Raheb Homavandi)