US House to vote on future of Iraq tonight. 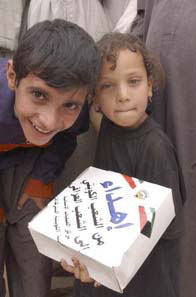 Iraqi children show humanitarian food rations distributed by the Coalition during an effort to provide food and water to Iraqi citizens in need on April 8, 2003. The U.S. is working with international relief organizations to help provide food and medicine for the Iraqi people. (USAID)

After Representative Murtha’s call to leave Iraq, Republican Representatives are calling for a vote tonight on the war. Ths OSM has this:

House Republicans, sensing an opportunity for political advantage, maneuvered for a quick vote and swift rejection Friday of a Democratic lawmaker’s call for an immediate troop withdrawal from Iraq.

“We want to make sure that we support our troops that are fighting in Iraq and Afghanistan,” said Speaker Dennis Hastert, R-Ill. “We will not retreat.”

House Democratic Leader Nancy Pelosi had no immediate reaction to the planned vote.

The GOP leadership decided to act little more than 24 hours after Rep. Jack Murtha, a hawkish Democrat with close ties to the military, said the time had come to pull out the troops. By forcing the issue to a vote, Republicans placed many Democrats in a politically unappealing position _ whether to side with Murtha and expose themselves to attacks from the White House and congressional Republicans, or whether to oppose him and risk angering the voters that polls show want an end to the conflict.

(7:43 PM CST) Rep. Tancredo Lists Iraq successes. Very powerful. 180 newspapers. 2 candidates in Iraq debated. I want Americans home tomorrow. I feel a knife in my heart when I hear about our a fallen soldier. Mr. Speaker, I am not in the best terms with the President. I ask my colleagues from the left to please don’t let your hatred of this president sway your vote.

The liberals are getting rowdy in the House.

(7:58 PM) Rep. Miller (D-GA) Whines that Murpha has been slandered. He says that the President slandered him. (a lie) He goes over! He won’t shut up! (applause) Murpha is a hero!

(8:00 PM) Rep. Rohrabacher (R-Cali.) Says that it is outrageous that they are crying slander after the way they have treated President Bush. (right on!)

(8:15 PM) Pelosi- Republicans have stooped to new low! The Republican deception today is a disgrace. Jack Murtha is a decorated veteran. Our colleagues call him a coward. (lie) The attack on him is so dishonest. (lie) The American people have rallied to Murtha’s truth. (could this woman be any nastier?) Let us join him and salute our troops and join Murtha to his loyalty to them (huh?)

(8:20 PM) Rep Gingrey (R-GA) (Like him!) The troops deserve our thanks! Cheap talk abounds but it is not bounded. The words echo out. Our troops hear us tonight. Put your vote on the record and put the rhetoric aside.

Callers appalled that the Democrats don’t suppport our Commander and Chief!

It is very close.
Yeahs- 210
Nays- 202
Final Tally thanks to Lord Floppington.

(9:00 PM CST) Rep. Weldon- (R-PA) I have never had to vote to withdrawal US troops from Somalia, Kosovo, etc. Strokes Murtha. It is wrong that Murtha should have to wait 5 months to get a letter from the Administration. The President should invite Murtha down for a talk.

(9:10 PM) Rep. John Murtha is up speaking! Says he is for a draft. Repeats this poll from Iraq that is bogus. Says that the defense department backs this poll! That is a lie. The poll was put out supposedly by British Intelligence. There has never been any substance to this poll.

I knew that bogus poll would haunt the war effort. Iraq the Model wrote about it earlier HERE.

The war is not going as advertised.
We cannot continue.
The perception of our troops in Iraq is causing the attacks.
He gives a wonderful surrender speech.
The military has accomplished their mission(?)
He’s says we need to fight this war together (by surrendering).
Our troops have become the primary target (please explain mosque bombings today).
Surrender! Now! (my words, his resolution)

(9:25 PM) Rep Bill Young (R-FL) We made a commitment. We cannot negotiate. Who do we negotiate with, OBL? Al Zarqawi?
We need to send a strong message to our troops and to our loved ones. We need to let them know that we are here to support them.

(9:45 PM) Murtha has read two anti-war letters. (Is this supposed to be how military families feel this way.)
He uses the 80% figure again.

I have heard about enough from Murtha who is pulling out anti-war letters and pushing his agenda.

(10:00 PM CST) POW Rep. Sam Johnson (R-TX) He will not allow the US to abandon their soldiers again. The need to have faith that a few politicians will not pull the rug out from underneath them. We can’t do it. We are making great progress in Iraq. Remeber the images those pictures of the democratic election. You would not know about the last vote since the media did not cover it. It’s going to take time. (a great speech) Cut and Run is irresponsible and unreasonable. Americans must fight Al Qaida over there and not over here. This is the same thing as what happened in Vietnam. Withdrawal is not an option! I salute our troops.

Resolution is not adopted.