The new Asterix comic is not subtle in its dig at America’s intervention in Iraq. 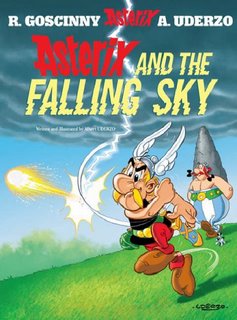 The new Anti-Bush Asterix comic has been a smash in Europe:

Astérix and his band of Roman-bashing Gauls took European bookstores by storm in October in a new comic book adventure — the 33rd in the series — simultaneously distributed worldwide in 27 countries and in 13 languages.

With an initial run of eight million copies, ‘Asterix and the Falling Sky’ may well have broken the record for a first printing of any comic book ever published.

The 3.2 million copies distributed to bookstores in France even topped the release last month of that other pint-sized wizard of book sales, Harry Potter, whose most recent installment mustered a mere 1.2 million copies in French.

Whether sales will keep up with the frenzy of Friday’s release is another question.

Reactions to the uncharacteristically politicized story — featuring thinly veiled and unflattering allusions to US President George W Bush — has been mixed at best.

The new Asterix comic includes characters representing Walt Disney and President Bush and a storyline of soldiers in search of lethal weapons:

In the new Asterix adventure creatures from the planet Tadsylwine (an anagram of Walt Disney) invade Brittany with an army of dim-witted soldiers that are dressed like superheroes and announce that are seeking the Gaul’s magic potion at the behest of their sage, Hubs (an anagram of Bush). These “Americans” aren’t the only interlopers–another group of space invaders, the Nagmas (an anagram of manga — the Japanese comics that are even more popular in France than they are in the U.S.), also want the potion. It quickly becomes clear that Asterix and the Falling Sky is really about “cultural imperialism” and that Gallic virtues are under attack from both Hollywood and Tokyo.

No Pasaran reports that the comic is not the hot seller in Pro-America Poland as it is in other parts of Europe.