JIMMY SAYS ALL OF THE REASONS FOR WAR WERE FALSE,
GOING TO WAR IN IRAQ WAS ILL ADVISED, UNJUST & UNNECESSARY,
VIDEO HERE

* Jimmy,… “I am a moderate.”
* The deterioration of congeniality is the fundamentalist Christian’s fault
* The “doubtful” presidential election of 2000 caused the political divide
* Republicans prefer military action to diplomacy
* Republicans believe poor people have easy lives
* The NRA has misled many “gullible” people

Jimmy Carter may not have been good at attacking Ayatollahs, but he still can blast America with ease. He hasn’t lost that touch to chastise America at every opportunity at 81 years of age. Yesterday, the eternal 39th president again slimes the current administration.

Carter seized on a Washington Post report that the United States had set up secret detention centres around the world for terror suspects in an interview with NBC’s Today Show.

“In the last five years there has been a profound and radical change in the basic policies or moral values of our country,” said Carter, a Democratic Party president who served between 1977 and 1981.

“This is just one indication of what has been done under this administration to change the policies that have persisted all the way through our history.”

While Carter said he had not seen proof the Bush administration manipulated intelligence in the run up to war with Iraq, he condemned the administration over claims that Iraq had links to terror groups.

“I think that the claims that Saddam was involved in 9/11 and the claims that he had massive weapons of mass destruction that would threaten our country were manipulated at least to mislead the American people into going to war,” he said.

But Texas Rainmaker noted yesterday that back in 2003 Jimmah had this to say,

“We want Saddam Hussein to disarm but we want to achieve this through peaceful means. He obviously has the capability and desire to build prohibited weapons and probably has some hidden in his country.” 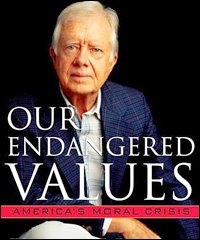 In his new book, “Our Endangered Values, America’s Moral Crisis”, Carter warns of “blurring the line between Church and State.” (NPR)

Nowadays, the Washington scene is completely different, with almost every issue decided on a strictly partisan basis. Probing public debate on key legislative decisions is almost a thing of the past. Basic agreements are made between lobbyists and legislative leaders, often within closed party caucuses where rigid discipline is paramount. Even personal courtesies, which had been especially cherished in the U.S. Senate, are no longer considered to be sacrosanct. This deterioration in harmony, cooperation, and collegiality in the Congress is, at least in part, a result of the rise of fundamentalist tendencies and their religious and political impact…

A strong majority of both Democrats and Republicans agree that our country is more politically divided than at any time in living memory, a fact that is partially explained by the doubtful presidential election of 2000 and the almost unchanging split during the following years between “red” and “blue” states.…

Among Republicans, the percentage endorsing diplomacy in preference to military action is minimal, while Democrats take the opposite point of view. In the approach to combating terrorism, two-thirds of Republicans believe that use of overwhelming force is best, while an even larger proportion of Democrats think that, although our armed forces should be used when our nation’s security is threatened, excessive use of military action tends to increase animosity against our country and breed more terrorists. This sharp and growing difference over the issue of whether international disputes can be better resolved by diplomacy or by military action is now the most accurate predictor of party affiliation — more important than gay marriage, homosexuality, or abortion…

Americans also increasingly support more government assistance for the poor and needy, but one remaining difference is that many more Republicans than Democrats believe that poor people have easy lives. It is encouraging that this prejudice against the poor is decreasing significantly among all Americans…

More than eleven hundred police chiefs and sheriffs from around the nation called on Congress and President Bush to renew and strengthen the federal assault weapons ban in 2004, but with a wink from the White House, the gun lobby prevailed and the ban expired…

But many of us who participate in outdoor sports are dismayed by some of the more extreme policies of the National Rifle Association (NRA) and by the timidity of public officials who yield to their unreasonable demands. Heavily influenced and supported by the firearms industry, their primary client, the NRA, has been able to mislead many gullible people into believing that our weapons are going to be taken away from us…

However, revolutionary changes have taken place in our government’s domestic and foreign policies, affecting the definition and protection of “moral values.”

I wonder if Jimmy paid attention to the Ethiopians who were killed by their government yesterday as they fought for democracy in the streets of Addis Abada. Jimmy Carter worked his magic back in May to hhelp prop up another dictator in another fraudulent election. It is doubtful that their shocking deaths in the fight for freedom will faze the “moral” Jimmy Carter, America’s Eternal 39th President.