Sunday Service in Sangla Hill, Pakistan after the Christian Church was torched. 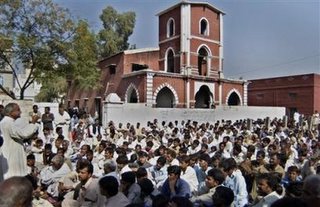 The Christians held an open-air service today in Sangla Hill, Pakistan after their church was torched this weekend by an angry mob of Muslims. Authorities have arrested 90 of the rioters:

The crowd, including women wearing black armbands to protest Saturday’s attacks, also demanded protection for the minority community in the small town of Sangla Hill.

The crowd dispersed after Catholic Archbishop Lawrence Saldanaha advised them not to retaliate.

“Police have arrested around 90 people for rioting and violence and vandalising Christian property,” he said.

Yousaf Masih, a Christian accused of desecrating the Muslim holy book, has been detained, he added.

Witnesses said at least two churches were destroyed in the attack by more than 1,000 enraged Muslims. The mob then ransacked a Christian school, set its furniture on fire and attacked a hostel where a pastor lives.

Residents said the attack was prompted by allegations from Muslims that Yousaf Masih had burnt copies of the Koran. Christian leaders said Masih’s rivals had made a false accusation after losing money to him at gambling.

“A Muslim cobbler and a goldsmith lost money to the accused Yousaf Masih in gambling. They refused to pay the money and created this nuisance,” Akram Gill, a minority Christian MP, told AFP.

Pervez said charges of desecrating the Koran were being investigated. The crime under a blasphemy law is punishable by death. 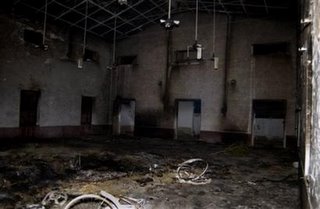 The main hall of a church is seen after the attack by angry Muslim mob in Sangla Hill, about 130 kilometers (80 miles) northeast of Lahore, Pakistan on Saturday, Nov. 12, 2005. A crowd of about 1,500 Muslims attacked and burned two churches in eastern Pakistan on Saturday following reports that a Christian man had desecrated Islam’s holy book, the Quran, police said. (AP Photo)

The Pakistan Christian Post is claiming the damage to be much more extensive than originally reported:

A mob of 3,000 people, mostly youth, set to fire three Churches and homes of two Clergymen as well as destroyed a nursing hostel, nuns’ hostel, a convent school and four other houses in Sangla Hill area of district Nankana on Saturday.

Ten hours after the incident, announcements were made from mosques asking people to gather in front of the Jamia Madni Masjid of the town. Similar announcement were also made after Fajr prayers on Saturday. People were asked to observe a complete strike and not to send children to schools.

Religious leaders made fiery speeches and allegedly provoked the mob to set to fire each and every place of worship of the minority community.

Obeying the orders, the protesters rushed to Presbyterian Church of Pakistan situated on the Faisalabad Road and set it to fire. All the furniture, fixture, articles, and religious books were consumed by the blaze.

The mob also burnt the residence of Pastor Tajamal Perveiz.

The enraged youth then went to the Church of Holy Spirit in the Mancher Colony and vandalized it as well as the residence of Father Semson Dilawar.

Some 650 girls receive education at the school, majority of them Muslim.

Police used tear-gas shells and resorted to baton charge to disperse the crowd.

HERE is a previous post on the torchings of the two Pakistani Christian Churches.

World Net Daily has more on the church attacks in Pakistan.