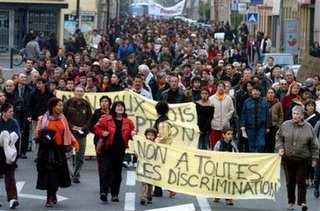 Residents gather for a peace march, departing from the housing project of La Reynerie in Toulouse, sout western France, to reach the city center, Saturday, Nov. 12, 2005, following two weeks of unrest triggered by the accidental deaths of two teenagers in Clichy-sous-Bois, east of Paris. The banner in foreground reads ‘No to all discrimination’. (AP Photo/Remy Gabalda)

France banned all public gatherings in central Paris that might create disorder to head off calls for violence in the capital after two weeks of civil unrest in French suburbs that has led to 2,440 arrests.

Rioting that has plagued poorer districts since Oct. 27 continued last night, with 502 cars torched around the country and 206 arrests made, the police said today. That compares to 463 cars and 201 arrests a day earlier and marks the first increase in car burnings in five days. Almost 7,000 cars have been burned across France since the rioting began.

Last night, rioters threw makeshift bombs at a Mosque in Carpentras, in southwest France. Though twenty-odd people were inside, the fire was contained and no one was injured, police said. 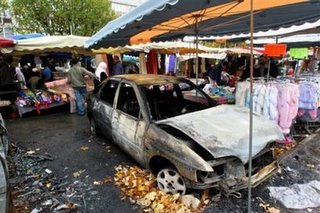 The Clichy-sous-Bois market, east of Paris, takes place around the remains of a recently torched car, in this Nov. 2, 2005 file photo. While immigrants from former colonies helped rebuild post-World War II France, many of their children and grandchildren have been tearing much of it down in riots across the country. They have set fire not only to buildings and cars, but to the very republican principles that the nation holds dearest. (AP Photo/Jacques Brinon)

Police on the city’s famous Place Bellecour square made two arrests in what state news agency AFP says is the first rioting in a major city centre.

Lyon has imposed a curfew for the first time in two weeks of nationwide unrest.

Thousands of police are patrolling Paris to enforce a ban on all public meetings likely to provoke rioting.

Friday night saw more cars torched than the night before:

The number of cars torched overnight in France climbed slightly over the previous night to 502 in a 16th night of unrest that took its heaviest toll on the French provinces, police said Saturday.

Security was boosted in the capital with some 3,000 police officers fanning out around strategic points to counter feared weekend attacks targeting Paris. Gatherings were banned from Saturday morning until Sunday morning.

“We returned to an almost normal situation in Ile de France,” said national police chief Michel Gaudin, referring to the Paris region. Arson attacks were counted in 163 towns around France, he said. The count of those detained overnight stood at 206, bringing to 2,440 the number of suspects picked up in just over two weeks of unrest.

Two Molotov cocktails were tossed at a mosque Friday evening in the southern town of Carpentras, but it was not immediately clear whether the attack was linked to the unrest that has wracked the poor suburbs and small towns of France since Oct. 27. President Jacques Chirac demanded that investigators quickly find out who was behind the attack.

You knew this was coming… The Los Angeles Times says that some link the riots to the French Colonial past.

But, if that is true will the fact that the country has passed colonial era emergency legislation hurt or improve the situation? 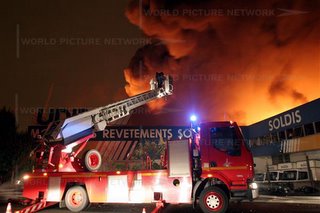 Tonight is the 17th night of violence arson and rioting in France. (WPN)