“Women have been made to stop on the streets of my town. They were dragged from their cars by their hair, they were practically stoned and their cars were set ablaze…”
Brussels Journal

The Anchoress has an email from a friend in Paris who says it is bad over there! 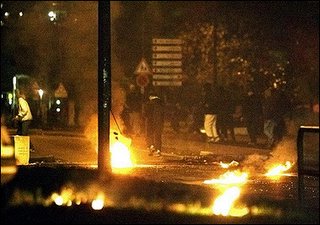 Several molotov cocktails burning in ‘Le Mirail,’ a neighbourhood of Toulouse, France, after a clash between policemen and young rioters. Nightly violence flared in riot-hit parts of France but the threat of emergency curfews appeared to have taken the edge off the urban unrest that has gripped the country for almost two weeks. (AFP/Lionel Bonaventure)

Late Monday, rioters in the southern city of Toulouse ordered passengers off a bus, then set it on fire and pelted police with gasoline bombs and rocks. Youths also torched another bus in the northeastern Paris suburb of Stains, national police spokesman Patrick Hamon said.

Outside Paris in Sevran, a junior high school was set ablaze, while in the suburb of Vitry-sur-Seine youths threw gasoline bombs at a hospital, Hamon said. Nobody was injured.

The riots in France are ringing alarm bells throughout Europe:

The riots in France that started in the Parisian suburbs are ringing alarm bells throughout Europe. These incidents of civil disobedience should serve as lessons to neighboring countries on how not to treat a minority population.
For more than 50 years, France has done little to assimilate its nearly 6 million African and Muslim minorities, leaving them forgotten in impoverished ghettos, where there are 21% unemployment, few services and virtually no government representation. 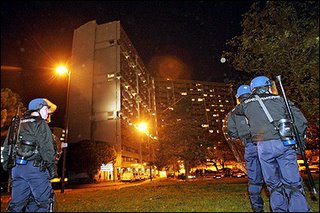 Policemen stand guard at the entrance of ‘Le Mirail,’ a neighbourhood of Toulouse, France, after a clash between policement and young rioters. Nightly violence flared in riot-hit parts of France but the threat of emergency curfews appeared to have taken the edge off the urban unrest that has gripped the country for almost two weeks. (AFP/Lionel Bonaventure)

The time of French blundering without feeling the consequences is over:

End of an era: The time of cultural innocence and political naïveté, when the French could blunder without seeing or feeling the consequences, is drawing to a close. As in other European countries (notably Denmark and Spain), a bundle of related issues, all touching on the Muslim presence, has now moved to the top of the policy agenda in France, where it likely will remain for decades.

These issues include a decline of Christian faith and the attendant demographic collapse; a cradle-to-grave welfare system that lures immigrants even as it saps long-term economic viability; an alienation from historic customs in favor of lifestyle experimentation and vapid multiculturalism; an inability to control borders or assimilate immigrants; a pattern of criminality that finds European cities far more violent than American ones, and a surge in Islam and radical Islam. 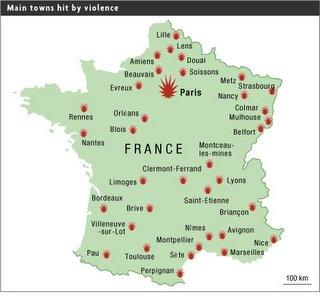 Victor Davis Hanson picks apart the media bias we are seeing in the reports about this violence:

To attribute the riot to “frustration” and “no work” is to indulge a highly questionable view of human action that reduces it to environmental forces outside the individual. This materialist determinism — the idea that material causes in the environment, especially economic ones, are the prime mover of humans — is not a scientific fact but an ideological prejudice whose roots lay in pseudo-scientists like Marx and Freud. It discards the fact of human free will and ignores the many complex and conflicting motivations of people that explain their actions. Sometimes people burn and loot out of economic frustration and hopelessness; sometimes they do so because of the innate joy in destruction and in the power that such destruction temporarily bestows; sometimes they do so because they want stuff for free; sometimes they do so in pursuit of some value or ideal; and sometimes they do so just for the sheer hell of it.