Night 11 of the French Riots:

* First casualty as man is killed while trying to put out a fire
* Bus is hijacked and later set on fire
* New high from day before in torched cars at 1408, up from 1295
* Molotov cocktails thrown at churches, schools and daycare facilities
* 11 police officers are injured aftr being shot upon by protesters

French officials are very upset and will be holding more meetings. 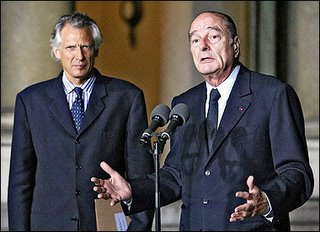 French president Jacques Chirac (L) gives a speech next to French Prime minister Dominique de Villepin, at the Elysee palace in Paris, after a meeting with his top security advisers. Riots in France’s poor city suburbs appeared to be spiralling out of control after the worst night of violence so far and the first death, deepening the severest unrest to engulf the nation since the 1968 student uprisings.(AFP/Patrick Kovarik)

France suffers first casualty in rioting. The situation is spiralling out of control for the 11th straight night as rioting has now spread throughout the country:

A man who was beaten by an attacker while trying to extinguish a trash can fire during riots north of Paris has died of his injuries, becoming the first fatality since urban unrest started 11 days ago, a police official said Monday.

Sunday night outside the city youths fired at police and hurled flaming Molotov cocktails at churches, schools, and a daycare center in an 11th night of violence. Amidst the violence, a bus was hijacked, the passengers were kicked off, and then the bus was then set on fire.

“We’re at war,” said a Paris shopkeeper. “We need the army.”

The riots are sending a “shock wave across the country,” according to national police chief Michel Gaudin.

Police say vandals burned 1,408 vehicles across France, setting a new high for overnight arson attacks since the unrest started Oct. 27. The figure was an increase from the 1,295 vehicles torched the night before. 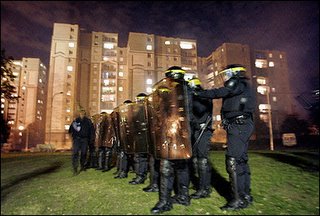 French police hold a position in a residential sector of Corberil-Essones, southern suburb of Paris. Riots in France’s poor city suburbs appeared to be spiralling out of control after the worst night of violence so far and the first death, deepening the severest unrest to engulf the nation since the 1968 student uprisings. (AFP)

“I wonder how the French, who are very critical of Israel’s use of force in its territories, will decide to handle a problem in their own “occupied territories.” Will they be hypocrites and use force or will they cede their land to the “oppressed?” And if the French use force, how soon until suicide bombers start blowing themselves up in Paris to gain control of the land? If the French use force will other European countries criticize them as they did the Israelis or will they rally around the French hoping it will help quell any chance of violence in their own countries?

As elitists it was so easy for the Europeans to criticize the Israelis when the violence was far away, but now it’s in their own backyard. Either they’ll be hypocrites or cowards.

Right Thinking says that the situation has gone from bad to merde:

Ten riot police were injured by birdshot in a clash in the southern Paris suburb of Grigny, national police spokesman Patrick Hamon said. It was unclear whether the officers were shot with hunting rifles or a less lethal weapon, he said. Two officers were hospitalized; their lives were not in danger. (via Washington Times)

They say Beirut is the Paris of the Middle East. Does that mean Paris is the Beirut of Europe? Or is that an insult to Beirut?

Again from Glenn Reynolds, Captains Quarters says that there have been warnings of this for several years.