David Duke Proclaims from Damascus, Syria:
* Zionists want war and not peace
* Part of my country is “occupied” by Zionists
* Zionists control much of American media and government
VIDEO HERE

“Or Does it Explode” has much more on the “David Duke to Damascus” story including a transcript of his touching speech.

David Duke Travels to Syria to Proclaim “No War for Israel!” 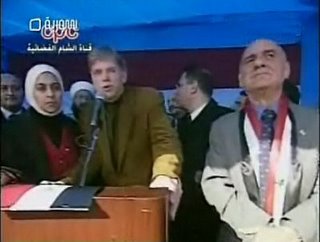 David Duke proclaims that the Muslims and Christians must join to confront the Zionist danger:

“Israel is performing an organized terrorism of state in the region,” former US Louisiana state representative David Duke said Wednesday in a joint meeting with Syria’s Mufti. “It is the US administration, not the US people, who antagonizes Syria,” the Mufti said, pointing out that all pressures on Syria are to made to force her to give up her national and pan-Arab resolute position.

During a joint meeting with the Duke, Syria’s Grand Mufti Ahmed Hassoun underlined the necessity of adopting a constructive dialogue and cooperation between Muslims and Christians in order to face the “Zionist danger and its destructive ideas by which the Zionists aim at ending the moral values as well as getting at security and stability in the region.”

On Monday he spoke more on the Jewish run American media:

He added that the pro-Israel neoconservatives in the US have influence on their country’s foreign policy and have been working behind the scenes through their mass media in the US to hide “the reality of Israeli terrorism against the Arabs.”

On the war on Iraq, the former US Senator said the war has created a crisis in the world, adding that those who advised the American administration to go into this war have been working to widen the scope of the crisis to spread it to other countries in the region.

He added that Israel has been practicing state terrorism against the Arabs, and the American people know this reality which “Zionist-controlled mass media seek to distort.”

Duke questioned why nobody has so far talked about the Israeli mass destruction weapons and its violation of more than 50 UN resolutions while it continues to occupy Arab territories and increase the number of its settlements in the West Bank. He added that Iraq was invaded under false allegations, that the country had WMD which never existed.

Duke expressed appreciation of Syria under the leadership of President Bashar al-Assad, saying he would do his bets to convey “the real peace-loving Syrian” stances to peoples across the world.

The news conference was attended by President of the World Charity Fund for Cooperation and Tolerance Among Religion and member of the Russian Union of Writers Valerie Borokhova, Professor of the Diplomatic Relations at the Academy of politics in Moscow, Director General of Islamic Furqan in Moscow Mohammad al-Rashid, several members of the Syrian Parliament and Arab and foreign correspondents.

Duke’s junket to Syria follows dwindling success in peddling his message to domestic audience. Though he managed to get elected to the Louisiana Legislature in 1989, he lost races for Governor and the U.S. Senate in Louisiana, and most recently, in May, 1999, failed his his bid for a seat in the Congress.

Syrian parliament member Muhammad Habash welcomed “Duke’s wonderful visit,” and said that the former KKK grandwizard “has given us a new and very positive view of the average American.”

The Syrian Public Relations Association says that Dr. David Duke, a former member of the House of Representatives in Louisiana, has dramatically improved the view of the Syrian people and the entire Arabic Middle East toward Americans.

Earlier this year Sweden was set to investigate Duke for racist remarks at a neo-Nazi rally.

Syria Comment Plus says that Syria has managed to attract both David Duke and George Galloway, the dream team of rejects.