“And so the advance of freedom in Asia has been one of the greatest stories in human history — and in the young century now before us we will add to that story. Millions in this region now live in thriving democracies, others have just started down the road of liberty, and the few nations whose leaders have refused to take even the first steps to freedom are finding themselves out of step with their neighbors and isolated from the world. Even in these lonely places, the desire for freedom lives — and one day freedom will reach their shores as well.”

“Today the people of Asia have made their desire for freedom clear — and that their countries will only be tranquil when they are led by governments of, by, and for the people.” 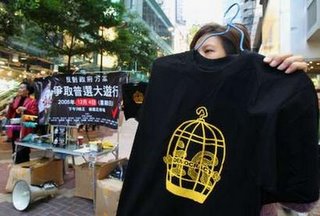 Pro-democracy activists sell T-shirts, featuring a cartoon with ‘Democracy’ inside a bird cage, in Hong Kong November 21, 2005. Activists called for people across the territory to join a December 4 march to demand for universal suffrage, raising the spectre of a mammoth protest two years ago that rattled the leadership in Beijing. (REUTERS/Bobby Yip)

George Bush is back in Washington but his words on freedom and democracy are reverberating across the continent. Ronald Reagan’s words helped to take down an Evil Empire decades ago. Now, George Bush has planted new seeds of hope for democracy and freedom from the homes of those persecuted in Burma to the jail cells of journalists in China. 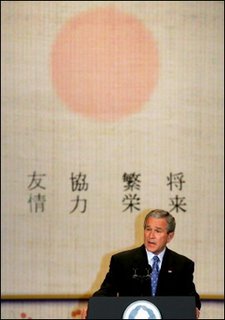 The Taiwanese government welcomed U.S. President George W. Bush’s endorsement of the self-ruled island’s democracy and said it would be willing to help Beijing build greater political freedom in China. Bush praised Taiwan as a society that had progressed from repression to democracy and prosperity and held it up as an example that China could follow in a speech in Japan Wednesday.

From Bangkok The Nation (via Burma Watch):

“Freedom is an Asian Value”

The notion that Western standards are incompatible with regional cultures belies reality. There is nothing wrong with having US President George W Bush pushing for greater freedom and democratisation in Asia this time around.

Indeed, he chose the right time to highlight his message, before the Asia-Pacific Economic Forum (Apec) leaders’ meeting in Busan, South Korea, this week. He targeted three countries in particular: China, North Korea and Burma.

The current political situation and levels of freedom of expression in these countries being what they are, the Asian political landscape really appears to be unhealthy. Bush was correct in declaring that freedom was an Asian value.

The time has come for Asian countries finally to embrace freedom, democracy and human rights fully. Why should Asian countries focus solely on economic matters and ignore these values? Asians can promote democracy on their soil themselves, the same as they do in the West.

But Bush is right as well, without strong pressure to reform Burma will never change… Aung San Suu Kyi has said something along those same lines, that when Asia denotes such values as being western, they supply ample excuse for dismissal. The people do well to be reminded that freedom is not a western interpreatation of how one should live but instead an aspect engraved in Asia’s own culture. An aspect that is being denied by a select few.

Although not particularly positive, the China Daily is openly talking about the president’s visit to the Christian Church and his remarks on Sunday. 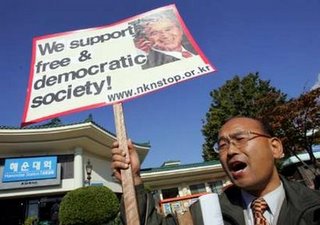 A protester holds a placard during a rally before the Asia-Pacific Economic Cooperation (APEC) summit in Pusan, South Korea November 17, 2005. About a dozen demonstrators gathered on Thursday to protest against North Korea and to express their support for the United States and democracy in South Korea. (REUTERS/Adrees Latif)

One Free Korea noted that China forced several high-profile dissidents to leave the capital before the president arrived on Sunday.

Asiapundit says Mongolia deserves much praise for the strides it has made in democracy already.

President George Bush left Asia yesterday. But, his words on freedom and democracy are rippling across the continent.