Many foreign experts watching the protests are wondering if Azerbaijan is next in line for a velvet revolution. 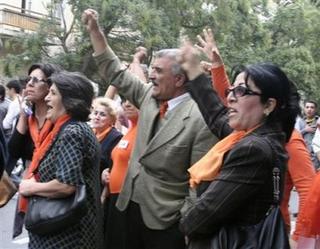 For the second weekend in a row Opposition Protesters took to the street in Baku and were again beaten and arrested by police:

Riot police beat and arrested anti-government protesters in the former Soviet republic of Azerbaijan Saturday, raising tensions in the run-up to parliamentary elections in early November. The demonstration was the latest in a series of protests that have raised concern about stability in the oil-rich Caspian Sea nation.

Clashes broke out in various parts of Baku, Azerbaijan’s capital city, as riot police prevented opposition protesters from reaching a city square where they planned to hold a rally.

Opposition leaders planned the rally to protest a police crackdown on a similar demonstration last Sunday in which many people were injured.

The police say they detained 34 people in the latest protest, but opposition leaders say more than 100 were detained. 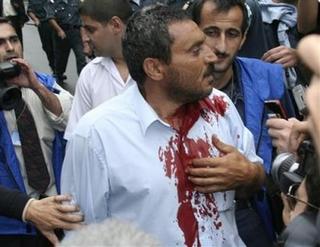 The Opposition is concerned that the elections in November will not run a free and fair election in November:

The opposition is protesting against what they say is the government’s failure to ensure a fair campaign for November’s parliamentary election.

A spokesman for the People’s Front of Azerbaijan, part of the opposition Azadlig alliance, said protesters had been “brutally stopped” by police.

Isak Avazogli said one activist had been badly beaten and had been taken to the party headquarters to wait for an ambulance.

“The opposition says more then 200 of their activists have been arrested. Among them are many candidates for the parliament,” said the BBC’s Natalia Anteleva from Baku.

She said a group of women calling for free elections were chased down a street by police and beaten with batons.

The US had urged the government earlier to use restraint with the protesters this weekend after the violence from last weekend.

“We urge restraint continuously, and dialog, and we’re monitoring the situation,” a spokesperson for the US embassy in Baku told AFP just hours before Azerbaijan’s opposition Azadliq block planned to launch the banned anti-government protest.

The US has so far been tight-lipped on its position concerning heightened tensions between the opposition and the authorities, attempting to defuse the situation earlier in the week by mediated negotiation between the two sides that eventually failed.

Tensions are rising ahead of a November 6 parliamentary vote that Azerbaijan’s President Ilham Aliyev has accused the opposition of exploiting to “destabilize” this mostly-Muslim republic.

Sandwiched between Russia and Iran, Azerbaijan’s vote will be watched closely as an indicator of democracy in a region that is rapidly becoming an important oil transport corridor for the United States.

After the government refused to sanction Saturday’s rally at a venue in central Baku despite repeated requests, the opposition branded the decision “unconstitutional” and has vowed to press forward with the protest to demand free elections.

The US has been pushing for democratic reform in Azerbaijan throughout the year. The US ambassador was even interviewed on TV pushing for free elections this November.