At least five were killed in the suicide bombing at a busy market. 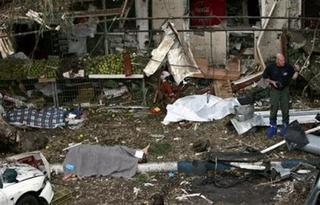 Covered bodies lie on the ground at the site of a suicide bomb attack in the Israeli coastal city of Hadera, some 40 km (25 miles) north of Tel Aviv, Wednesday Oct. 26, 2005. (AP) 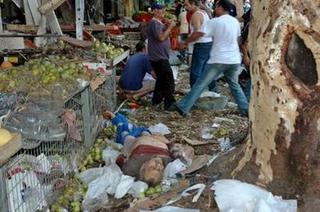 Israeli civilians try to help the wounded following an explosion in the northern Israeli city of Hadera October 26, 2005. A Palestinian suicide bomber blew himself up in a market in the Israeli coastal city of Hadera on Wednesday, killing at least four people and wounding dozens, officials said. (Reuters)

Islamic Jihad claimed responsibility for the bombing, saying it was avenging Israel’s killing of a top West Bank commander on Monday.

“It’s like a war zone here,” one witness, Idan Akiva, said after the blast at the popular outdoor market where pools of blood mixed on the pavement with smashed produce and shattered debris.

Israel has been on edge amid the latest flare-up of violence in and around the Gaza Strip, one of the worst since an Israeli withdrawal from the coastal territory on September 12 after 38 years of occupation.

Israeli warplanes and artillery pounded an area of northern Gaza early on Wednesday in response to militants firing a rocket into southern Israel. No casualties were reported.

Hours later, a bomber blew up in front of a sandwich stand in the main market in Hadera, a frequent target of attacks in a 5-year-old Palestinian uprising. At least five people were killed and 30 wounded, emergency officials said.

It was the first bombing inside the Jewish state since August 28, when a suicide bomber struck at the entrance to Beersheba’s central bus station, wounding 20.