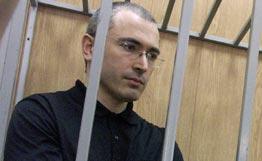 Khodorkovsky was transferred last Saturday to standard penitentiary no.10 near the Chita region city of Krasnokamensk not far from the Chinese border. The city of 50,000 is home to one of the world’s biggest uranium processing plants, as uranium ore is mined in the vicinity. (Ria)

Mikhail Khodorkovsky, the sentenced billionaire and political opponent of President Putin was sent to Siberia to serve his term out at a camp this last week:

Khodorkovsky arrived in the region early this week, the source said without specifying the colony where the ex-CEO would serve his term. Meanwhile, Khodorkovsky’s lawyer Anton Drel said the tycoon’s relatives had still not received any information regarding his whereabouts.

Russian Newsru.com website reported that the former oil tycoon had been moved to colony No.10 in the Chita region.

A defense lawyer for Mikhail Khodorkovsky’s business partner Platon Lebedev said Wednesday that Lebedev had been sent to a prison in the Russian Arctic region of Yamalo-Nenets.

Lawyer Yevgeny Baru said Lebedev’s relatives were notified that he had been sent to a prison in the village of Kharp in the remote province, nearly 1,200 miles from Moscow, The Associated Press reported.