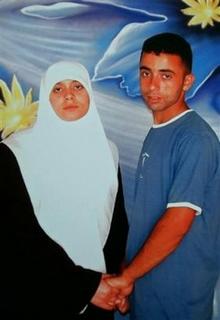 Palestinian Samar Sabih, left, poses in a picture with her husband Ramsi in this photo distributed by the family in the West Bank town of Tulkarem Tuesday Oct. 11, 2005. Sabih, 22, Hamas’ first suspected female bomb-maker is a 22-year-old university graduate who was recruited in Gaza and sent to the West Bank to teach others to assemble explosives, Israeli security officials say, noting a sharp rise in the use of women by militant groups in the past two years.Sabih was arrested at her home in the West Bank town of Tulkarem in late August, in a nighttime raid involving more than a dozen jeeps and a helicopter, said her father-in-law, Jaber Sabih. Israel’s Shin Bet security service announced the arrest on Monday, after lifting a gag order. (AP)

The Palestinians are already at a juncture in their infancy as a nation to either move from their violent past or be consumed by it.

Israeli troops left the territory last month to end 38 years of military rule, under what the Jewish state billed a “disengagement” from conflict and militants branded a victory.

Palestinians trying to rebuild the Gaza Strip must now deal with the legacy of a culture of martyrdom and militancy that appears better suited to years of violence than to making the territory a model for statehood.

But recent developments do not look promising. 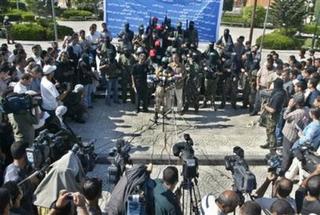 Media surround masked members of eight armed Palestinian factions during a joint press conference in Gaza City Saturday Oct. 8, 2005. The group, that includes al-Aqsa brigades, which is linked to the ruling Fatah movement, militias linked to Islamic Jihad and Hamas military wing released a statement reaffirming that ‘as long as the Israeli occupation continues resistance will continue by all means, using all tools available’. (AP) LGF has more on this staged photo. 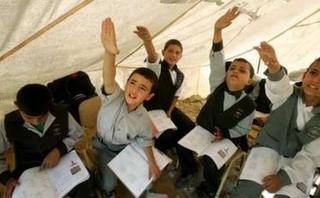 Palestinian boys study inside a tent outside their destroyed classroom at al-Arkam school in Gaza, October 1, 2005. Palestinians trying to rebuild the Gaza Strip must now deal with the legacy of a culture of martyrdom and militancy that appears better suited to years of violence than to making the territory a model for statehood. Palestinian Planning Minister Ghassan al-Khatib said cutting poverty and unemployment, and creating a conducive atmosphere to reduce militant tendencies among children is the top priority. (Reuters)