Pakistani officials predicted Sunday that many more thousands of dead would be found in earthquake-ravaged Kashmir as heavy rains in the Himalayan region drenched homeless survivors in mud and misery.

The latest estimate of at least 40,000 deaths in Pakistan’s portion of Kashmir alone would mean more than 54,000 people were killed when the magnitude-7.6 quake hit the mountains of northern Pakistan and India. That represents a jump of 13,000 from the official count of known dead. 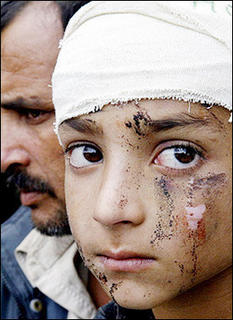 A Kashmiri injured looks on while waiting outside a makeshift medical center in the earthquake-devastated Muzaffarabad, capital city of Pakistan administered Kashmir. Thousands of Pakistan quake survivors face death from cold and disease unless help reaches them fast, rescuers said as the disaster’s confirmed death toll leapt to more than 54,000. (AFP)

Four children including an infant were pulled from the rubble alive on Sunday:

Four children, aged between a few months and nine years, were pulled alive out of the rubble of the earthquake in Balakot on Sunday, eight days after it pulverised a wide region and killed thousands. “Four children have been pulled out alive near the Balakot area,”

Orphaned children are abducted from a hospital:

Three children orphaned in the October 8 earthquake have allegedly been abducted from the Pakistan Institute of Medical Sciences (PIMS) children’s hospital, while an attempt to kidnap a girl failed, sources said on Sunday.

A man tried to kidnap a 13-year-old girl from the hospital on his motorcycle, but fell into a ditch on the way. A large crowd gathered when the girl cried for help. The kidnapper fled the scene.

Many areas have not yet been reached by rescue workers:

The magnitude of the disaster seems to get bigger every day. There are many areas that have not been reached and the human loss is inestimable. With snow likely to cover these far-flung areas within a couple of weeks, many who might still be alive will die in the harsh conditions if timely help does not arrive.

“There are still cities which are not cleared of debris and the death toll could go to 70,000 or 80,000. It is the worst tragedy in our history,” he said.