“In addition, dental records in New Orleans, in many cases, are destroyed or at least inaccessible, Cataldie said. Also, animals have been feeding on the bodies, making fingerprint identification harder.”

In a press conference on September 13, 2005, Louisiana Governor Kathleen Blanco lashed out at the federal government for dragging its feet on bldy collection.

But, a US House Committee Investigation this week reported that the bodies of those killed by Hurricane Katrina went uncollected for more than a week in the New Orleans area because the federal government was waiting for Louisiana’s governor to decide what to do with them!

In other words… Governor Blanco was giving a press conference lashing out at the federal government when she had just signed the forms to release the bodies for pickup! 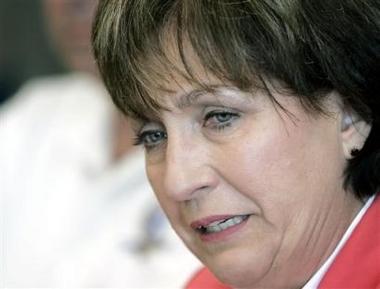 The dead of New Orleans come out to haunt Governor Blanco on Halloween Weekend.

A report released this week shows that Louisiana Governor Blanco left bodies on the streets of Louisiana to bloat and rot while she decided what to do with them:

Bodies of people killed by Hurricane Katrina went uncollected for more than a week in the New Orleans area as the federal government waited for Louisiana’s governor to decide what to do with them, according to memos released Thursday by a Republican-led House committee.

The 38 pages of e-mail between FEMA representatives and Pentagon officials contradict the contention by Louisiana’s Democratic Gov. Kathleen Blanco, two weeks after Katrina hit on Aug. 29, that the federal government was moving too slowly to recover the bodies.

The memos indicate that morgues were not ready to receive bodies until Sept. 7 two days after the first memo complaining about Blanco’s inaction, and nine days after Katrina slammed into the Gulf Coast…

“This issue must be addressed, and frankly, there is operations paralysis at this point,” Jordan wrote. “FEMA is pushing state to see what they want to do, and indications are that governor is involved in some of the decisions,” especially regarding burial.

But, back on September 13th, Governor Blanco tired of being beat on for her many mistakes in the relief efforts, blasted the federal government in a press conference:

Embattled Louisiana Governor Kathleen Blanco decided to play politics with corpses complaining the dead were not treated with respect because of the federal government! There have been no similar complaints from Alabama or Mississippi concerning those killed by Hurricane Katrina.

The dead “deserve more respect than they have received,” Gov. Kathleen Blanco said at state police headquarters in Baton Rouge.

She said the Federal Emergency Management Agency has slowed down the process by failing to sign a contract with the company hired to handle the removal of the bodies, Houston-based Kenyon International Emergency Services.

A week earlier the democratic media insisted on photographing bodies being recovered in Louisiana and Mississippi.