Mugabe Blasts US at UN Conference to Great Applause 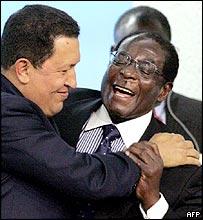 Venezuela’s President Hugo Chavez congratulates President Mugabe with a big hug after his UN speech today in Rome where he blasted the US and Great Britain for his country’s woes. (BBC)

Robert Mugabe lashed out at “Unholy Men” US President Bush and British Prime Minister Tony Blair at the 60th anniversary celebrations of the United Nation’s Food and Agriculture Organization:

“Must we allow these men, the two unholy men of our millennium, who in the same way as Hitler and Mussolini formed (an) unholy alliance, formed an alliance to attack an innocent country?” Mugabe told the conference.

Delegates attending the FAO conference applauded Mugabe at the end of his speech. 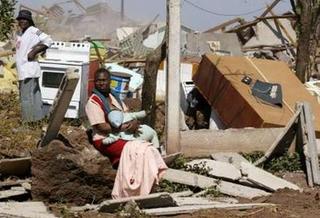 A Zimbabwean woman nurses her child amidst the debris of her destroyed house in the capital Harare, Zimbabwe, June 3, 2005. In a move illustrating tensions with the aid community, the U.N. is sending a top aid official to Harare to smooth differences with President Robert Mugabe over a stalled $30 million humanitarian relief programme it offered after the government demolished thousands of shacks and ‘illegal’ houses this year.

Many governments across the continent have accused Western-backed non-government organisations (NGOs) of being closely aligned to the governments that fund them and whose aid they distribute. Mugabe has led an assault on NGOs with a tough law tightening registration and barring foreign funding for NGOs with political and human rights programmes.

Too bad for his people as 700,000 were left without homes and the thousands who are near starvation, as the country spirals into crisis on all levels.(Reuters)

The US is stunned that Mugabe was invited to the UN Food Conference after his policies have left hundreds of thousands of Zimbabweans near death without homes or food:

US ambassador to the FAO, Tony Hall, said he was amazed the organisation had invited a leader “who has done so much to hurt his own people”.

“Food has been used as a weapon,” Mr Hall said.

Zimbabwe is struggling to feed an estimated 3.8 million people in the rural areas, and has to import at least 37,000 tons of maize a week.

UN delegates applauded Mr Mugabe at the end of his speech.