Look who’s picture was on hand at the vote on Saturday! 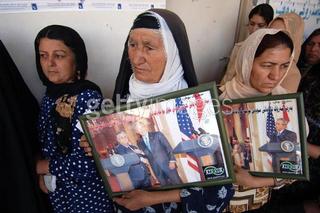 This is one of several pictures at friend, Stefania’s Free Thoughts blog from Italy. This picture from Getty Images didn’t make the front pages for some strange reason(?).

After a very successful day of voting on Saturday on the Iraq Constitution with little violence compared to January’s vote (less violence and death than what Pakistan saw in its vote earlier this year!) and a higher voter turn out than we see in the US, the media on Sunday had already moved the goal posts down field and was putting the focus on the results of the election.

Later when it started to look like the Constitution would pass, one western media service sounded downright distraught that the Sunnis were not able to stop the Constitution from being ratified.

How often do we see a whole family wear their finest clothes, put ribbons in their hair, and head out to a polling station? What do you think the odds are that these children will remember this historic day for the rest of their lives? 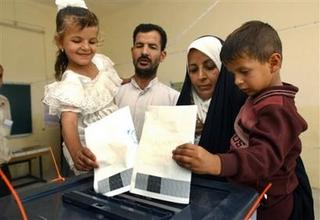 An Iraqi family allows their kids to drop their ballots into a box in Basra, Iraq, Saturday, Oct. 15 2005. Iraqis vote Saturday to give a ‘yes’ or ‘no’ to a constitution that would define democracy in Iraq, a country once ruled by Saddam Hussein. (AP)

The Arab media had mixed reviews on the election:

TRENDING: Remember the Young Woman Who Died While Waiting for a Coronavirus Test in New Orleans? …Yeah, Well Now the Truth Is Out

Ahmed Al-Jarallah, editor-in-chief of Kuwait’s English-language Arab Times, wrote that Iraqis scored a victory by voting on a new constitution despite three decades of Saddam Hussein’s oppression, two years of rampant insurgent-led violence and post-US invasion interference from Iran and Syria. “Terrorists will meet their final defeat in their final battle against the people of Iraq,Â he wrote.

In the United Arab Emirates (UAE) daily, the Khaleej Times, columnist Mohammed A. R. Galadari said Saturday’s vote proved that the skepticsÂparticularly within the mediaÂwere wrong. In his column, he highlighted Iraqi unity and the growth of a democratic process. Â”The media projected a view that a civil war was in the making there, (but) Iraqis haven’t indulged in any civil war, and the referendum has taken place in a peaceful way,” Galadari wrote. With Âthe way things went yesterday, there is hope that Iraq will have good days ahead.Â

But, I thought they were all selfish factions with no sense of national unity? Obviously, this Iraqi woman did not get the message! 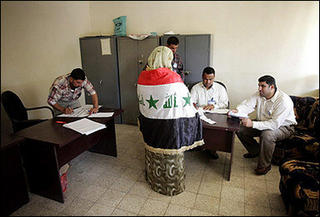 An Iraqi woman draped in her national flag shows identification as she arrives to vote in Iraq’s national referendum on a draft constitution, at a polling station in central Baghdad. (AFP)

On Monday, then, the media conceded that the vote passed and that voters in Sunni areas even had higher than expected “yes” votes. So, what is the media to do except to spread rumors that there must be a mistake or fraud somewhere.

Iraq’s election commission announced Monday that officials were investigating “unusually high” numbers of “yes” votes in about a dozen provinces during Iraq’s landmark referendum on a new constitution, raising questions about irregularities in the balloting.

The media still does not understand the “thug principle” where the silent majority does not share the same beliefs as the western media. Iraqi thugs may push threats on the people, but that doesn’t mean they will get votes. No wonder, thugs hate democracy.

The only dance pictures were from the Iraqi Media via Iraq the Model. 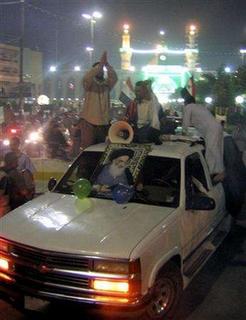 Iraqis celebrate a ‘yes’ vote in the constitutional referendum in front of the Imam Hussein Shrine on a car with a poster of Grand Ayatollah Ali al-Sistani, in the southern Iraq city of Kerbala, October 16, 2005. The Bush administration has touted last weekend’s referendum in Iraq as progress. (Reuters)

Freedom for Egyptians has a wonderful perspective on how the voting process is working in Iraq and how the different Arab Regimes and Media are seeing the developments there.

The Anchoress notes the mood in the press after the election.
California Conservative says that the media is still counting.