KASHMIRI PAKISTAN IS OVERWHELMED WITH THE DESTRUCTION,
VIDEO HERE

An entire generation of young people has been wiped out in hard hit areas of Pakistan. 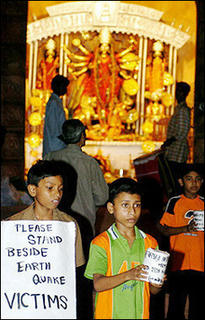 Indian boys collect money for the victims of the earthquake from visitors at a makeshift community place of worship for the Hindu goddess Durga in Kolkata, 10 October 2005, the second day of Durga festival. (AFP)

India is setting aside political differences to help their neighbors in Pakistan:

India is dispatching a planeload of about 25 tons of food, tents, medicine and other supplies for possible delivery by Tuesday. Pakistani Foreign Minister Khursheed Kasuri said there was no problem accepting aid from its rival.

“When it is a question of tragedy of this magnitude, it’s not a question of one-upmanship,” Kasuri said in an interview with India’s New Delhi Television. “That is why the president of Pakistan has gone on record as having said that we aren’t going to stand on ceremony.”

India and Pakistan are but the latest countries to smooth over differences, taking diplomacy to another level when faced with disaster. 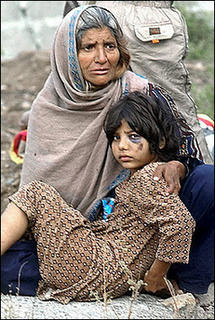 A Pakistani woman cradles her injured daughter while waiting for rescue along with thousands of residents in the completely destroyed town of Balakot in the North Western Frontier Province. Rescue teams raced to find survivors in the rubble and comfort the suffering as Pakistan said the death toll from the weekend earthquake could hit 40,000. (AFP)

Condoleezza Rice may stop over in Pakistan on her Central Asian trip if she feels it will be helpful to the area.

Pakistan is pleading with the international community for help with the disaster.

The US has already sent much needed helicopters to the disaster area from Afghanistan.

HERE is a link to the Salvation Army South Asia donation site.