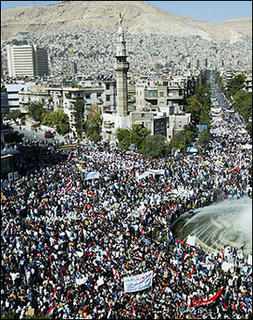 Thousands of Syrians rally in central Damascus in support of the regime on the eve of a UN Security Council meetingThe United States said it would discuss possible action against Syria with fellow members of the the UN Security Council after a UN report implicated Damascus in the assassination of former Lebanese prime minister Rafiq Hariri. (AFP)

Syria denied the accusations implicating the Assad Regime in the assassination of Rafik Hariri in Lebanon earlier this year, even though much of the evidence from a phone call was taped:

“This is totally untrue,” Deputy Foreign Minister Walid Moallem (search) said in a call to a talk show on Syrian state television. “I did not go to Premier Hariri to make threats. I went to him to inform him about my mission and ask him to cooperate in order for the mission to succeed.”

The U.N. report, released Thursday night, refers to a tape of a conversation between Moallem and Hariri on Feb. 1 — 13 days before the assassination.

In the conversation, the report says Hariri complained that security services were waging a campaign against him. “But Lebanon (search) will never be ruled from Syria. This will no longer happen,” Hariri said, according to the report.

The report says Moallem told Hariri “we and the [security] services here have put you into a corner.”

“Please do not take things lightly,” the report quotes Moallem as saying.

Moallem said Sunday that his relations with Hariri were based on friendship and their having worked together since the 1980s.

These women were not pleased with Israel’s role in the UN Mehdis Report(?) 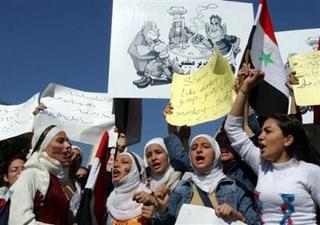 Syrian girls demonstrate Monday, Oct.24, 2005, in Damscus, Syria, to protest against the U.N. report on the assassination of former Lebanese Prime Minister Rafiq Hariri that implicated Syrian and Lebanese officials. Mehlis report is written in Arabic on the cartoon pot. Bush and Sharon are stirring the pot. The sign reads something to the flavor of… “Sharon like donkey, jump little monkey.” (AP)

The US pressed for immediate cooperation from Syria today and demanded no more obstruction in the assassination investigation.

France indicated Monday it would not support sanctions against Syria before the U.N. commission had finished its work. 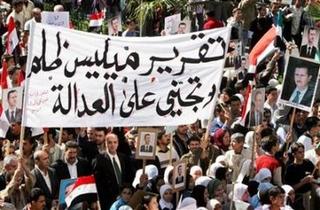 Syrians carry a huge banner during a protest in Damascus October 24, 2005. The United States on Monday demanded immediate cooperation from Syria with the U.N. investigation of the murder of former Lebanese Prime Minister Rafik al-Hariri and said: ‘No more obstruction.’ (Reuters)

Athena has a bad feeling about this protest today.
Daniel Drezner has a good roundup.
Syria Comment Plus has thoughts on the significance of the Mehlis Report to the Middle East.

But the demonstration fell far short of government expectations that hundreds of thousands or even a million would show their allegiance to Syria’s president, Bashar Assad, and strengthen his hand as the UN Security Council begins debating Syria’s culpability today. Opposition leaders and some government supporters said the low turnout showed the degree of public fear and suspicion that has developed in Syria toward Assad’s government.