President Bush urged UN action on Friday following the release of the report. 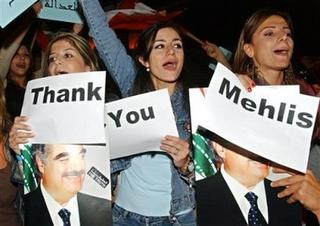 Lebanese supporters of former slain Lebanese Prime Minister Rafik Hariri chant slogans during a gathering for prayers and to welcome of the U.N. report in the Martyrs’ Square, in downtown Beirut, Lebanon, Friday, Oct. 21, 2005. (AP)

Lebanese leaders say they have further proof that Syria had planned to destabilize the country following the Hariri murder. Captured Lebanese bombers confessed to taking bribes from Syria-backed middle men:

Lebanese police said they had evidence of a wider Syrian plot to bomb its smaller neighbour, just two days after a UN probe implicated Damascus in the February murder of five-time premier Rafiq Hariri.

A police statement said three Lebanese suspects in custody had confessed under interrogation to taking money from a Lebanese go-between for a foreign agent of Syria to carry out bomb attacks around Beirut after its April troop withdrawal.

The go-between, identified only as Hassan M., 33, remained at large, the statement added.

“Prior to the withdrawal of Syrian forces from Lebanon and at the urging of an intelligence agent of non-Lebanese nationality, the fugitive Hassan M. paid several people to commit terrorist acts by throwing bombs and starting firefights in Beirut and its outskirts in order to sow unrest.”

The statement identified the suspects in custody as Ahmed H., 25, Ali M., 25, and Malek M., 47 and said all three had confessed to being “recruited without proceeding to action.”

Lebanon’s Pro-Syrian President Emile Lahoud refused to step down after the UN report was released, yesterday:

Lebanon has been on high alert for the release of the much-awaited report, with 10,000 soldiers and police on the streets as part of what officials called an “undeclared state of emergency”.

“It is a damning report for President Lahoud and his top aides. He must accept the consequences and resign,” said MP Elias Atallah, who is allied to the movement headed by Hariri’s son Saad which commands a parliamentary majority.

Lahoud claimed on Friday that he had no contacts with Hariri’s killers even though he is implicated in the report:

Lebanon’s President Emile Lahoud had no contact with a suspect named by a UN inquiry into the killing former Prime Minister Rafik al-Hariri, the presidential office said on Friday. “The press office in the presidential palace categorically denies this information, which has no basis in truth and is a part of pressure campaigns against the president,” it said in a statement.

UN investigators reported on Thursday that a suspect had called Lahoud minutes before a truck bomb killed Hariri and 20 other people in Beirut in February. “It is a damning report for President Lahoud and his top aides. He must accept the consequences and resign,” said MP Elias Atallah, who is allied to the movement headed by Hariri’s son Saad which commands a parliamentary majority.“It is a solid foundation on which to pursue the inquiry and uncover the truth,” added Education Minister Khaled Qabbani.

Meanwhile, Syria Comment Plus says that this is more than damning for the continued existence of Assad II’s Ba’athist regime.

It does not only implicate mere members of the regime for their direct involvement in Rafiq Harriri’s assassination, but in essence the very regime itself.

Robert Mayer at Publius Pundit has a terrific roundup on the news today from Lebanon.
Michael Totten was there and photoblogged the demonstration.
Light Seeking Light has pictures from the rally.