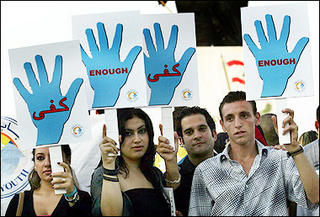 Lebanese hold placards reading ‘Enough’ during a gathering to protest against terrorism in downtown Beirut. The number of tourists visiting Lebanon dropped by almost 14 percent in the first nine months of the year, after the country was rocked by more than a dozen attacks including the blast that killed ex-premier Rafiq Hariri. (AFP)

Aljazeera’s correspondent in Lebanon said that the Popular Front for the Liberation of Palestine General Command had put its forces on alert as a defensive measure, after Lebanese army had imposed an intense security ring on one of the front’s headquarters in al-Sultan Yaqup area in the Lebanese Bekka.

Lebanese troops backed by tanks and armoured vehicles are heading to the scene, Aljazeera’s correspondent added.

UN special envoy Terje Roed-Larsen is due to send the Security Council his latest report on Wednesday on the implementation of Resolution 1559, which demands all armed groups in Lebanon disarm and foreign troops withdraw.

Roed-Larsen is expected to report that Syria continues to arm proxy fighters and run spies in Lebanon despite withdrawing its own troops from its neighbour in April, Lebanese official sources said.

The report would compound international pressure mounting on Syria since a UN inquiry last week implicated it in the killing of former Lebanese Prime Minister Rafiq al-Hariri in February.

About 390,000 Palestinian refugees live in 12 camps around Lebanon, which the Lebanese army does not enter.

Lebanon notified the UN that it is cracking down on the flow of arms and people from Syria into the Palestinian Camps:

“The government of Syria has informed me that the smuggling of arms and people across the Syrian-Lebanese border does indeed take place, albeit in both directions,” Kofi Annan said in a report to the U.N. Security Council.

The Lebanese government has informed the United Nations that Lebanese armed forces have detained a number of Palestinians carrying Syrian identification, Annan said.

His report details Syrian compliance with a Security Council resolution that bars foreign armed forces on Lebanese soil and calls for all armed groups in Lebanon to be disarmed.