A month after Hurricane Katrina, the facts don’t back up the claims of racism originally made by an angry young rapper and fed by the mainstream media, liberal politicians as far away as Germany, and entertainers, during the worst days of the tragedy.

A different picture of Katrina… 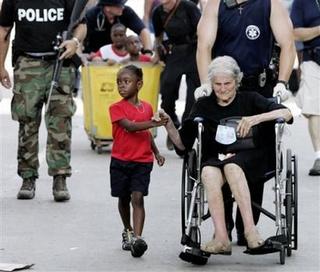 Fact: Of the identified victims released to families from the makeshift morgue in St. Gabriel 44% are African American, 47% are Caucasion, 3% Hispanic, 8% Unknown. 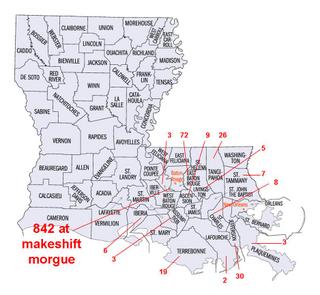 The tenuous work at the makeshift morgue in St. Gabriel Parish continues. What is clear at this point is that this natural disaster was was not selective of race on the pain and suffering it caused the people of Louisiana.

“If this thing were to happen in Miami, in LA, or Chicago, we would have had everything we need.” Mayor Ray Nagin on Oprah, September 5th, 2005. (Video HERE)

Fact: While the devastation in New Orleans continues to receive much attention in the aftermath of Hurricane Katrina, residents of the semi-rural areas even closer to the Gulf of Mexico are coping with the virtual obliteration of their hometowns: Here in St. Bernard Parish (95% caucasian), almost every one of the 26,700 homes was destroyed in Katrina’s 23-foot storm surge.

The damage is so bad that most of the storm-tossed villages here, home to fishing boats and natural gas plants, remain ghost towns.

Fiction: The federal government was slow to respond to New Orleans because the people were black..

Fact: “The federal government pretty much met its standard time lines, but the volume of support provided during the 72-96 hour was unprecedented. The federal response here was faster than Hugo, faster than Andrew, faster than Iniki, faster than Francine and Jeanne.”

For instance, it took five days for National Guard troops to arrive in strength on the scene in Homestead, Fla. after Hurricane Andrew hit in 2002. But after Katrina, there was a significant National Guard presence in the afflicted region in three.

Fiction: The levee was blown up to destroy the black part of town. -Louis Farrakhan

Fact: While predominantly black (70%) New Orleans is able to be repopulated, the predominantly white (95%) St. Bernard Parish residents are coping with the virtual obliteration of their hometowns.

This accusation has been repeated by numerous individuals (See Al Sharpton, above).

“Actual funds for levee upgrades were diverted by the city and state to other projects.” via Instapundit.

Fiction: Black Mayor Ray Nagin on the majority of blacks in the Superdome during Oprah interview: “That’s why the people in my opinion got into this animalistic state…”

Fact: The “animalistic state” (of the blacks in the dome and Convention Center) was overblown by the media and the mayor:

The New Orleans Times-Picayune on Monday described inflated body counts, unverified “rapes,” and unconfirmed sniper attacks as among examples of “scores of myths about the dome and Convention Center treated as fact by evacuees, the media and even some of New Orleans’ top officials.”

Fiction: “That’s why the people in my opinion got into this animalistic state. Because they didn’t have the resources…” Mayor Nagin on “Oprah”.

Fact: Governor Blanco would not allow supplies into the SuperDome.

The Red Cross is confirming to Garrett that it had prepositioned water, food, blankets and hygiene products for delivery to the Superdome and the Convention Center in the immediate aftermath of the hurricane, but were blocked from delivering those supplies by orders of the Louisiana state government, which did not want to attract people to the Superdome and/or Convention Center.

Fiction: “They (the blacks in the SuperDome and Convention Center) were trapped.” Black Mayor Ray Nagin on the Oprah Show.

Fact: The black mayor refused to follow the City Plan to evacuate the people left in the city including the prescribed use of city buses for the evacuation.

The governor did not call in the National Guard to the area until after a Wednesday press conference. (Video HERE)

Fiction: FEMA should have evacuated the blacks from the city.

Fact: “FEMA does not evacuate people from disaster areas. That’s not our job….Emergency management begins at the local level. FEMA is a coordinating agency.” Michael Brown, FEMA Hearings, September 27, 2005.

Michael Brown didn’t flood New Orleans. Nor did he fail to order a mandatory evacuation. Nor, when the order was finally given by the appropriate authorities, was he the one who failed to carry it out competently.

Fiction: Experts say the personal and professional upheaval is catching up with the New Orleans police force in the form of desertions, suicides, corruption and perhaps even the videotaped beating by officers of a 64-year-old man in the French Quarter. (not racism but media excusing bad behavior)

Fact: Conditions have been very difficult for all rescuers.

“And 400 emergency workers, all of whom have lost their homes, are being housed on the Scotia Prince, an old ship that once ferried vacationers between Maine and Nova Scotia.”

Fiction: Blacks in New Orleans had to wait to be rescued because of government racism. “George Bush doesn’t care about black people, “They have been trying to sweep us (African-Americans) under the kitchen sink and it was so in people’s faces and so on Tv… that they couldn’t even hide it any more,” Kanye West on September 10, 2005.

Fact: From Anthony Geeck on “The Katrina Media Message” as reported on 97.1 FM Radio:

“St. Bernard, Jefferson, and St. Tammmany are all 90% white bedroom communities. St. Bernard was hardest hit in the hurricane. It was over 5 days before the Federal Government showed up. The Feds don’t know we exist. It should have been the governor who said “Hey, we haven’t heard anything from St. Bernards”. We were totally inundated. Over 95% of all of the housing was underwater.”

“It’s not like some remote fishing village like they try to portray us. 66,000 people live in my parish. It’s the 18th largest parish in Louisiana. They’re picking up pets in the city and I still have people in the attics trapped waiting on roofs for someone to come rescue them…“

Fiction: Katrina brought out America’s racism. “With the questions swirling around Hurricane Katrina’s rescue efforts, America once again finds itself face to face with the issue of race. I hope this time, we find the courage to confront it truthfully.”

Fact: Heather MacDonald– “If the government’s failure to get help instantly to Katrina victims reflects American racism, why have the images of thousands of poor, displaced blacks triggered the greatest outpouring of charity in American history?”

The purpose of this post is not to diminish, belittle or ignore the suffering of the people of the Gulf States but to now look back at the facts of the disaster and expose that this disaster and disaster response was not selective based on race, religion, or ethnicity.